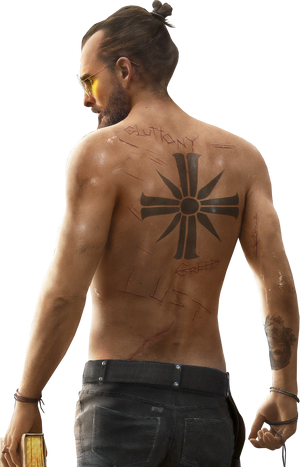 Joseph Seed also known as "The Father", is the main antagonist of Far Cry 5 and the deuteragonist in Far Cry New Dawn and Inside Eden's Gate.

He is a ruthless megalomaniac who is the founder and the leader of the Hope County-based extremist religious terrorist cult organization "Project at Eden's Gate" alongside his brothers and adoptive sister who he dubs "The Heralds"; Jacob, John, and Faith Seed. Eden's Gate has used both coercion and violence to bring the existing residents of Hope County into its cult, as ordered by Seed, and, as of the events depicted in the game, is in direct conflict with The Resistance and its members.

Powers and Abilities: Superhuman Physical Characteristics, Weapon Mastery, Indomitable Will (Showed no panic while Hope County was destroyed by nuclear bombs), Extreme Pain Tolerance (Due to his absolute faith), Charisma, Vast resources, Expert tactician and manipulator, Illusion Creation, Mind Control, Empathic Manipulation and Poison Manipulation (With the Bliss), Possibly Preparation (Implied to have caused the nuclear explosion that destroys Hope County in the Resist Ending), Possibly Precognition (May actually have some sort of supernatural powers, as is shown with his prediction of the nuclear explosion (although he may have been at fault) and his quote "Sometimes it's best to leave well enough alone" in the secret ending, which was a direct quote from Whitehorse while approaching in the helicopter)

Attack Potency: Wall level (Strong enough to pierce a man's eyes with his thumbs. Fought the Deputy and his allies and was able to knock them down multiple times)

Speed: Superhuman (On par with the Deputy, who can outrun grizzlies and other animals)

Lifting Strength: At least Class 1 (Comparable to the Deputy, who is able to snap necks push and tip over cars with some difficulties)

Durability: Wall level (Survived to a chopper crash without almost no injuries and later recovers from a violent car accident while Hope County was burning under nuclear fire. Took many hits from the Deputy and his allies and friends when they tried to arrest him, and even tanked multiple shotgun rounds and was still able to recover, as shown in the ending of Far Cry 5 and the beginning of Far Cry: New Dawn. On par with the Deputy himself, who can take RAT4 missiles and trip mines that can easily one-shot massive 18-wheeled trucks)

Standard Equipment: Various weapons and firearms including an AR-C

Intelligence: High. Joseph Seed is an extremely charismatic, persuasive and highly manipulative man, leading to his rise to power and convincing numerous people to join him. He proved himself to be an excellent strategist and tactician, taking over Hope County with his family and even ended up enlisting the police in a reduced amount of time. Thanks to his plans, Hope County was cut off from the world and became exclusive territory of Eden's Gate. Even after the Deputy killed Jacob, Faith, and John, Joseph's followers continued to believe in him and execute his orders.

Weaknesses: Normal human weaknesses. Loses his will to live after witnessing his son's death.

Retrieved from "https://vsbattles.fandom.com/wiki/Joseph_Seed?oldid=4854059"
Community content is available under CC-BY-SA unless otherwise noted.