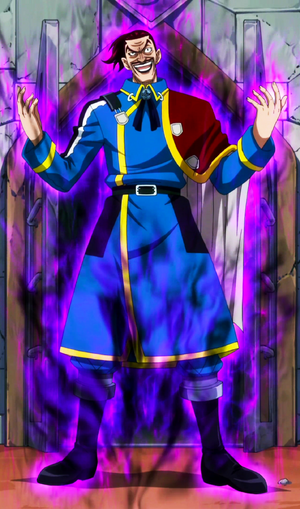 Jose Porla (ジョゼ・ポーラ Joze Pōra) was the Guild Master of the now-disbanded Phantom Lord guild and was the main antagonist of the Phantom Lord arc. Before instigating the Guild War between Phantom Lord and Fairy Tail, he was one of the Ten Wizard Saints. His instigation of the aforementioned war, however, ultimately cost Jose his title as a Wizard Saint and led to the disbandment of his Guild.

Intelligence: Gifted (Has a wealth of experience in battle. He also possesses a wide variety of magic, implying many years of study and practice)

Shade (幽兵シェード Shēdo): Jose is a master of Shade. His spells revolve around the manipulation of ghostly figures, which can be used for a variety of purposes. He mainly employs his Magic for offense, having proven himself capable of shaping large masses of his ghosts into powerful ethereal tornadoes, pillars and lightnings, and also to immobilize opponents, as well as shoot various kinds of blasts and beams. Jose's Magic has been described as feeling very evil, and has been shown to make nearby people feel physically sick and cold when Jose employs it. With Shade, Jose is also capable of creating ghostly soldiers that he can command at will, even from far distances. These have their faces hidden by hooded capes, with their blank eyes glowing under the hoods, don long robes and are armed with large sabers. Their initial abilities are likely those of simple trained soldiers, but Jose can freely increase their strength remotely, to the point that they become powerful super-soldiers: in such state, their eyes become more evil-looking, their robes crackle like flames, and they don't employ weapons anymore, assaulting their enemies bare-handed with powerful unarmed moves. They are also strong enough to drag and employ large battering rams composed of massive logs in small numbers. Until they are destroyed, those ghostly soldiers show no sign of fatigue or exhaustion. They can be produced in large masses, as Jose could create enough of them to overpower the exhausted Fairy Tail members.

Dark Pulse
Add a photo to this gallery

Thought Projection: Jose has been shown capable of using this Magic, producing an astral projection of himself, impervious to damage, which allowed him to communicate over long distances, and, most importantly, carry on his deceptive plans, as shown from his using of Thought Projection to distract Makarov Dreyar and have him sneak-attacked and critically injured by Aria. Jose's skill with this form of Magic seems remarkable, as shown from Makarov exchanging words with it, not realizing that what he was talking with wasn't actually Jose before physically striking him, and even managing to project the image of another individual, this being an unconscious, tied up Lucy Heartfilia.

Retrieved from "https://vsbattles.fandom.com/wiki/Jose_Porla?oldid=6322393"
Community content is available under CC-BY-SA unless otherwise noted.