Jonathan Joestar, nicknamed JoJo, is the first "JoJo" of JoJo's Bizarre Adventure and the main protagonist of Part I: Phantom Blood. He discovers the malicious intent that his adopted brother, Dio Brando, had been planning against his family for several years. This leads to the penultimate discovery based on his research of the Stone Mask that Dio had brought upon himself. To counter Dio and his new supernatural forces, he trains in the art of the Ripple to end his brother's path of evil.

Powers and Abilities: Superhuman Physical Characteristics, Body Control, Mastery of Hamon/Ripple (Empowers his body with solar energy and can transfer it towards objects and people. This can be used to harm any opponent weak to sunlight through contact with any living or non-living thing charged with Hamon), Durability Negation (via Hamon), Regeneration Negation (Against opponents weak to sunlight), Non-Physical Interaction (Hamon can be conducted via Stands which are non-corporeal; DIO/The World had to pull a punch against Joseph who had his body wrapped in Hamon), Minor Fire Manipulation, Water Manipulation, Magnetism Manipulation, Water Walking, Non-Physical Interaction (Hamon can interact with Stands that are non-corporeal), Mind Control and Biological Manipulation, Healing (Of himself and others), Regeneration (Mid-Low, can heal a broken neck, broken bones and scars with Hamon), Resistance to Poison (Can eject poisonous substances out of his body). Long after his death his body developed a Hermit Purple-like Stand that has clairvoyant/psychic powers alongside Non-Corporeality and Invisibility

Attack Potency: Building level (Defeated Dio's fodder zombies and Bruford. Tackled Dio through a wall), can ignore conventional durability with Hamon | Building level+ (Bisected Dio and was comparable with him in their final fight even briefly breaking his guard, undemonstrably stronger than Tarkus who was capable of peforming this), can ignore conventional durability with Hamon

Lifting Strength: At least Superhuman (Before his training he could keep advancing forward despite having three athletes clinging on to him, should be much greater after training) | At least Class 5 (Effortlessly overpowered and flung around Tarkus as he attempted to resist)

Stamina: Very High (Can fight multiple zombies and vampires at once despite being injured, lasted a few minutes despite his neck being pierced.)

Intelligence: Attended an upper-class academy with the intent on graduating as an archaeologist and his archaeological research was the key to unlocking the secret of the Stone Mask. Master of the Ancient Martial Art of Hamon, he managed to see through Dio's plans when no one else could, effective combat strategist, surprisingly well at sleight of hand, as shown by his ability to obtain a handful of roses without anyone seeing and decently skilled with the sword.

Weaknesses: He must maintain a proper breathing rhythm in order to use Hamon. His breathing can be interrupted by outside forces and stop the flow of Hamon.

Others: Not to be confused with Steel Ball Run's Johnny Joestar. 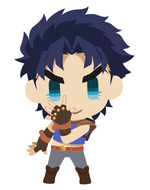 Jonathan as he appears in Jojo's Pitter Patter Pop 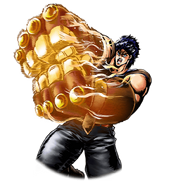 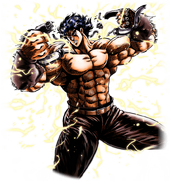