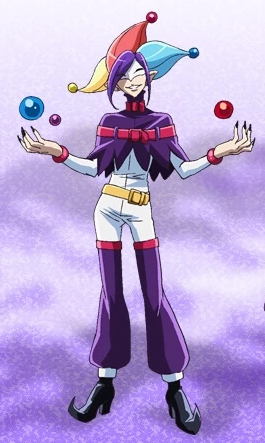 Joker (Rascal in English translations) is the mysterious and seeming leader of the commanders of the Bad End Kingdom trying to revive Emperor Pierrot by collecting negative energy from the human on Earth. He has a playful nature, often teasing his fellow commanders or perform typical circus acts such as riding a unicycle, juggling, or swing on a trapeze. Underneath his jolly nature, however, he's incredibly sadistic and takes great pleasure in demolition.

Attack Potency: Planet level (Defeated all five Cures at once in their first encounter.)

Standard Equipment: The Picture Book of Darkness, A Rapier, and Cards

Bad End Alternate Reality: Using his Picture Book of Darkness, Joker smudges black paint over it and creates realm with a blackish-purple sky. Victims within the realm lose their will to live or perform any action and emit negative energy, which the he collects for Emperor Pierrot. The ability also boosts the user's power and the opponents in this realm are also trapped and can only escape by defeating the user.

Akanbe: Joker will bring out a ball called Nose and uses it to create a monster called Akanbe (Buffoon in English translations). The power and abilities of these monsters are determined by the color of the Noses and the nearby object he uses to create it. He can even fuse or manually control some of them.

Ball of Neglect: Joker creates an entire dimension in the form of a purple magic ball and traps his opponents in it. Within this dimension, the opponent's minds and memories are erased and Joker can manipulate the entirety of the dimension.