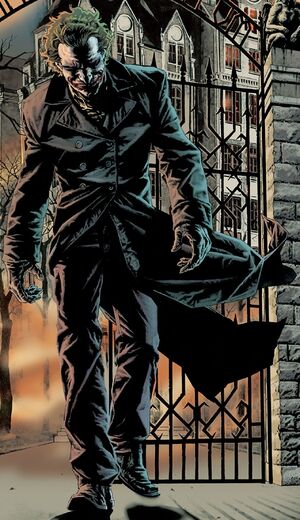 Joker is one of the main characters of the comic Joker and is a major plot-point in its sequel, Batman: Damned.

Powers and Abilities: Peak Human Physical Characteristics, Weapon Mastery (With knives, guns, and even random objects), Social Influencing (Easily manipulates people, even groups of people, into doing his bidding), Skilled Hand to Hand Combatant (Shown in his brief fight with Batman), Minor Berserk Mode (Can go into random fits of rage, in which he seems to lack logical thinking), Preparation, Pain Resistance

Speed: Athletic Human (Can keep up with the Batman)

Durability: Street level (Can tank attacks from Batman. Tanked a bad car crash. Survives a long fall into the river, though this is seemingly due to the Specter bringing him back, because Batman wished it)

Weaknesses: Is insane, and goes into brief but intense fits of rage spontaneously.

The Joker (Joker) Arthur's Profile (Both had no guns)