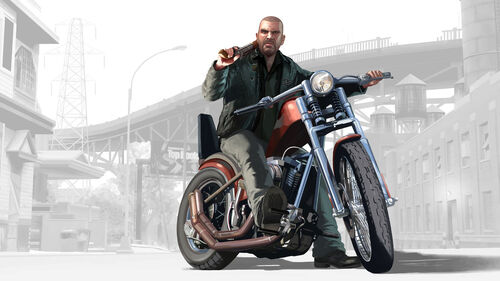 By 2013, the events of Grand Theft Auto V, Johnny and the remaining members of The Lost moved to Sandy Shores, Blaine County, where he was very brutally murdered by Trevor Phillips in a confrontation after Trevor himself was having sex with Johnny's former girlfriend, Ashley Butler.

Tier: 9-B physically, higher with melee weapons and firearms, 9-A with explosive weapons

Age: 34 during the events of GTA IV and The Lost and Damned, 39 in GTA V and at the time of his death

Powers and Abilities: Superhuman Physical Characteristics, Expert hand-to-hand combatant, Weapon Mastery, Vehicular Mastery (Can work around with a great number of cars and even more so with bikes), Stealth Mastery, Explosion Manipulation (via explosive weapons), Fire Manipulation (via molotovs)

Attack Potency: Wall level physically (Can trade blows with those who can harm him, essentially shares the same feats and movesets as Niko Bellic when it comes to combat), higher with melee weapons (Can easily deform car bodies and helicopters without issue) and firearms (Can easily destroy most vehicles and helicopters with ease), Small Building level with explosive weapons (Can one-shot multiple Annihilators with a single rocket launcher shot or grenades and grenade launcher shots. Can one-shot multiple cars at once and reduce them to charred metal. Easily blew up the reinforced prison gates of the Alderney State prison with just explosives in the final mission, erasing all the traces of whatever metal there was in the door)

Speed: Peak Human (Can keep up with vehicles moving at moderate speeds) with Subsonic+ combat speed and reactions (Can consistently react to oncoming RPG-7 missiles, which can hit Mach 0.9). Subsonic with most vehicles and helicopters. Subsonic+ to Supersonic+ attacking speed with most firearms

Durability: Wall level (Shares the same durability feats as Niko. Can survive high-speed crashes and being shot out of the windshield into walls at high speeds. Can take high-caliber rounds to the face at point-blank range and still keep going. Can survive one rocket launcher from a short distance shot before dying. Can also survive high dives into water and emerge unharmed), higher with Body Armor

Stamina: Incredibly high (Can go on for hours in a fight if need be)

Standard Equipment: Guns and other melee weapons (Although he is limited to one of each type)

Weaknesses: Is sometimes more concerned about The Lost MC than his own safety.