John Carlton, commonly known as Johnny Cage is a Hollywood movie star that decided in both timelines to participate in the Mortal Kombat tournament to prove himself as a fighter, while in the original timeline he was killed by Motaro during the invasion of Earthrealm, in the current one he was able to survive and marry Sonya Blade. However, after their daughter, Cassie was born, Johnny and Sonya split up due to her focusing mostly on her work and spending less time with her family.

Superhuman Physical Characteristics (Possesses superhuman strength allowing him to tear off heads, tear people in half and even split limbs like twigs), Martial Arts (Jeet Kune Do, Karate, Shinto Ryu, Shorin Ryu, Wrestling), Weapon Mastery (Wields guns, nunchaku, knives, brass knuckles as well as improvised weapons), Social Influencing (He's a popular action star who appeared in films like Ninja Mime, The Gist of my Fist, Sudden Violence I - III, and HWAAAA!!! (For which he won an Oscar)), Energy Manipulation (As a descendant of warriors bred by a Mediterranean war cult to fight the gods, he can generate green energy for various purposes), Energy Projection (Can hurl powerful orbs from green energies), Afterimage Creation (Can create energy afterimages), Statistics Amplification (Can increase attack speed and movement speed), Aura (Can coat himself in a glowing, emerald aura), Damage Boost (Able to boost his damage by infusing his strikes with energy), Duplication (Can create up to 2 "Mimics" or energy clones) Reactive Power Level (Can deal more damage when he is low on health), Summoning (Can summon his stunt double Jim to assist him in battle), Explosion Manipulation (Has explosive shades), Vehicular Mastery (He was able to ride and operate a tank), Acrobatics (Exercises enhanced condition, hypermobility and mid-air jumps. Can leap far distances, jump in mid-air twice and casually do splits in battle), Resistance to Ice Manipulation (Wasn't frozen solid by Sub-Zero's ice and quickly thawed himself out), Can interact with his past self, but will share with it irreparable damage & dead (As shown through MK11)

All previous abilities, Awakened Power (Unintentionally summoned his green halo when protecting a loved one), Instinctive Reaction (His power automatically protects himself from attacks), Forcefield Creation (Can create a full body forcefield)

Attack Potency: Large Building level (Defeated Scorpion and the revenants of Sub-Zero and Jax who is twice as strong with cybernetic upgrades) | City level (Defeated Shinnok, who effortlessly defeated Raiden, who can create and control storms, which requires this much energy)

Speed: Superhuman with Supersonic+ reactions and combat speed (Used his Split Punch move to dodge a rifle round from an M4 Carbine. Should be on par with Kabal) | Massively Hypersonic+ (Kept up with Shinnok, who can react to Raiden's lightning)

Durability: Large Building level (Able to survive attacks from Oni Warlords who can do this) | City level (Can withstand a blow from Shinnok without receiving any injuries)

Standard Equipment: His shades, nunchaku, and a photo for his fans. | Same as before, but has explosive shades, a camera, brass knuckles, radio earpiece, trophy, pistol and his very own action figure of himself.

Weaknesses: Is rather arrogant and full of himself, has an issue with getting through to some people | Loved ones have to be in danger for him to go into the Inner Power state. 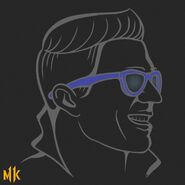 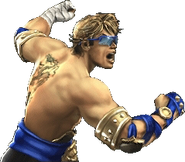 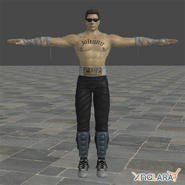 Johnny Cage in MK11.
Add a photo to this gallery