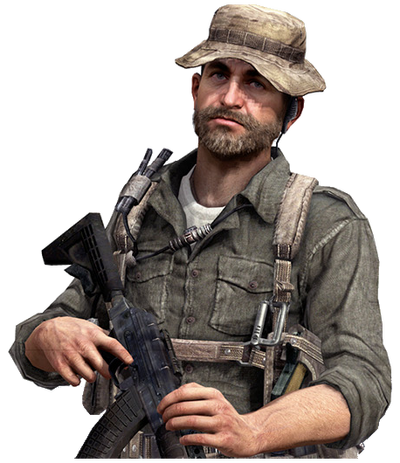 Captain John Price, callsign Bravo Six, is a British special forces soldier and one of the main protagonists of the Modern Warfare franchise. He is a member of the British SAS. In Call of Duty: Modern Warfare 2 (set five years after the first game), Price was incarcerated in a Russian gulag. He is later rescued and becomes a field commander of Task Force 141. Following the unit's disbanding and the death of its treacherous leader, General Shepherd, Price and longtime ally John "Soap" MacTavish enacted a personal vendetta to end the mastermind of World War III, Vladimir Makarov.

Attack Potency: Wall level physically (Can trade blows with those who can harm him, including General Shepard and Makarov, who can both survive helicopter crashes, kicked a door open while carrying Soap and splintered parts of it, and it would take this much energy for the door alone. Slammed Makarov through a reinforced glass ceiling, which withstood a violent helicopter crash), higher with most of his equipment, and higher with preparation (Can get almost every modern weapon or support such as a Mil-Mi 28 Havoc, AC-130, etc)

Stamina: High, despite of his age Price is tough enough to fight against elite soldiers for long period of time