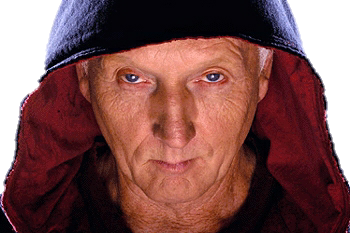 After the death of his child and his diagnosis with cancer, John Kramer tried to kill himself. However he survived, and from then on dedicated himself to putting people in traps to force them to appreciate their lives.

Attack Potency: Athlete level physically (Was able to overpower Mark Hoffman when he caught him by surprise, had to overpower multiple people to put them in his traps), Street level with hidden blade | Below Average Human level | At least Wall level (Traps can crush the human body, shattering/demolishing things like the human skull and spine. Explosives should be around this level), ignores conventional durability with some traps

Durability: Street level (Survived being savagely beaten down by a Officer Eric Matthews, being shot by a shotgun from a distance, and a bad car crash in which he was impaled by pieces of metal in his torso) | Below Average Human level (He had terminal cancer, so his muscles and bones were degrading really bad) | At least Wall level (Many traps are this size or composed of materials that would be this level)

Stamina: Athletic (Got up and walked away after being shot) | Extremely Low (Close to death, needs a wheelchair, can barely exert himself)

Intelligence: John Kramer is a genius capable of designing and creating highly advanced traps with often complex rules and escape methods. He has evaded the police for years despite his crimes, and has weaved complex mazes of crimes and manipulation to obscure the true nature of his tests, claiming many lives in the process. His manipulative abilities are truly exceptional as well, allowing him to turn many to his side and believe his own twisted view on the world.

Weaknesses: None notable | Most, if not all, of his traps have a way to survive them. However, the traps tend to leave the victim in a very wounded state (missing limbs, blood, organs, etc)

Key: Prime | End of his life | With Preparation

Note: This profile includes traps from the games: Saw: The Video Game and Saw II: Flesh and Blood

Mr. Glass (Unbreakable) Mr. Glass's Profile (10-C versions were used. Both were given one week of preparation)

Yugi Muto (Yu-Gi-Oh!) Yugi Muto's Profile (John was in his prime. The shadow game was Jenga)