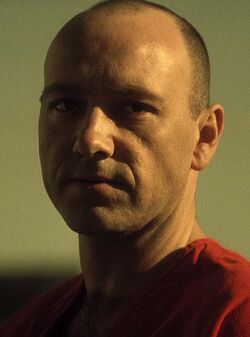 "John Doe" is the main antagonist of the drama/mystery/horror film, Seven (also called Se7en). His backstory and origins are unknown and never explained in the film. He is just a highly intelligent man who feels that it is his calling by kill those who personify the seven deadly sins.

Powers and Abilities: Weapon Mastery (Is skilled with blades and firearms, as well as using objects in his environment as weapons), Stealth Mastery (Easily got the drop on Mills when he was looking for him, possibly snuck up on his other victims), Preparation (All of his murders were meticulously planned before he committed them, such as getting all the required tools for these murders), Social Influencing (Easily manipulates his victims as well as David Mills into doing what he wants), Athleticism (Somewhat shown in this chase scene), Minor Pain Tolerance (Cuts off his own fingertips to avoid leaving fingerprints. Does this repeatedly because the skin grows back), Status Effect Inducement (via various drugs), Limited Sleep Manipulation (via Sleeping Pills; Shown with his "Pride" killing, where he gave her the choice to live disfigured or eat all the pills which would lead to death), Limited Paralysis Inducement (via Unknown Drugs; Shown with his "Sloth" killing. Possibly kept the victims body from naturally regenerating as well as keeping him alive for a year), Genius Intelligence

Intelligence: Genius (Is vastly intelligent as stated multiple times by Somerset, knows how to manipulate and outsmart the cops [only being in custody as he turned himself in to continue his plan], knew how to set-up elaborate and painful deaths, how much of a drug that could kill a man or keep one alive, how to frame another man for his crime, etc)