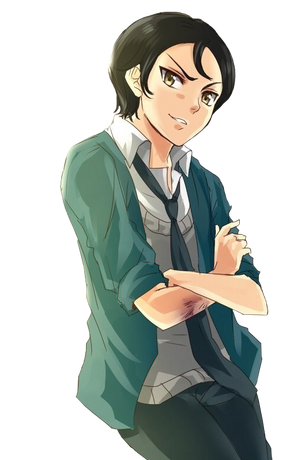 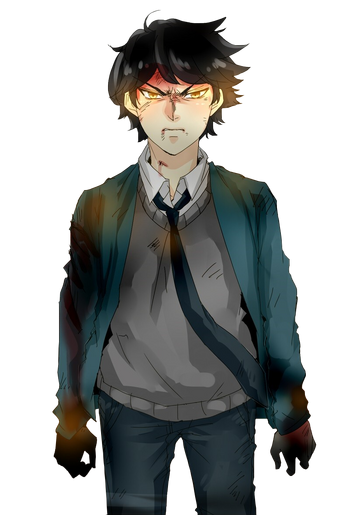 John Doe is a student of Wellston Highschool, and is one of the schools 'cripples'. He is bullied constantly due to his lack of powers, and as such has very few friends. Despite this, he is a carefree and kind guy, always trying to see the best in people, as described by Seraphina as inspiring. He does not let anything get him down.

Attack Potency: Small Building level (Caused explosions this big. Created , tornados and should be stronger then Gou, a High Tier who smashed the ground into pieces. He defeated half of his class at once with ease, as listed on his official expulsion record from New Bostin. One shot Ventus and Melli. He smashed through Arlo's barrier without having to copy it and defeated Arlo. His Power Mimicry also seems to be stronger than the original ability from the original user, granting him levels of this destruction from just Ventus' abilities.)

Speed: Subsonic (Should be superior to Waldo), higher with Speed (Superior to Wenqui, who used the ability to blitz him)

Striking Strength: Small Building level (Cracked through Arlo's barrier with sheer force and broke out with his ability copied.)

Durability: Small Building level (Considering the strength of Arlo's barrier and John ability to break it, he should be around this level. Can take punishment from High-Tiers like Arlo when he's mimicked enough abilities)

Stamina: Above Average, Likely Peak Human (Survived and defeated his entire class in an all-out brawl and showed no visible signs of fatigue.)

Range: Standard Melee range, can go up to dozens of meters with copied abilities

Intelligence: Above Average in School, Gifted in Fighting Capability. (He has been shown to grasp copied abilities instantly and use them to great mastery, even sometimes beyond the copied ability users capabilities, as shown with Ventus and Arlo.)

Note: John Doe does not retain abilities he copies after he deactivates his power. When making a versus thread with him, please specify which set of powers he is using from what fight, or if he starts with no set of powers.

Richard Spender (Paranatural) Spender's Profile (Note: Spirit Fusion Spender and Unrestrained John were used with his abilities from his fight with Arlo. Speed was Equalized)