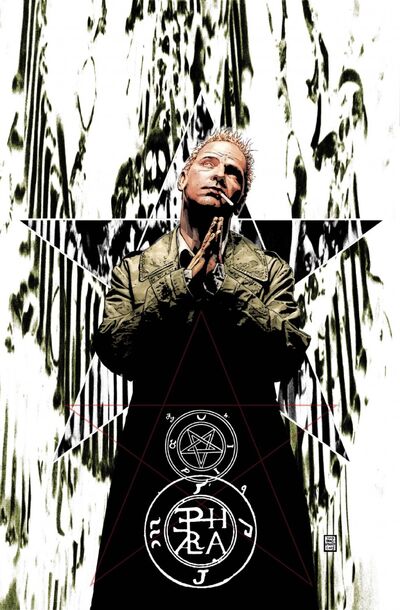 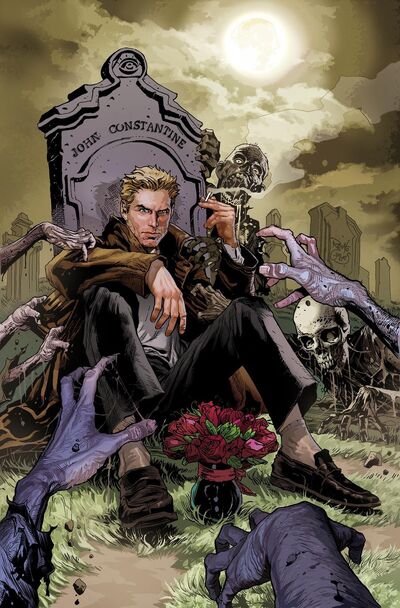 John Constantine is the protagonist of the long running popular comic book series Hellblazer and first appeared in Swamp Thing issue 37 in June 1985. He is a con-artist, magician, occult detective, and anti-hero. He was created by Alan Moore, Steve Bissette and John Totleben.

John Constantine, Hellblazer, is a working-class magician, occult detective, and con man. He is well-known for his scathing wit, endless cynicism, ruthless cunning, and constant chain smoking. A roguish counterculture anti-hero, Constantine is also a strident humanist driven by a heartfelt desire to defend mankind from the forces of evil.

John was born in Liverpool, but has spent most of his life growing up in London, from the sixties onward. He first left his father's house to live in a London squat aged fifteen. He is a natural born thrill seeker with hints of morality. Despite living in England for most of his childhood, Constantine has moved around the world on several occasions, following occult and mysticism all across the planet. He was born a twin, which he happened to strangle in the womb. His mother died in labor and his father blamed John for the death of his mother and that was the root to the friction between them. When not running away from home John Constantine was raised by his older sister Cheryl Masters.

Constantine is a chain smoker and has been from the very start of his characters introduction, his brand of choice is Silk Cut, though he has been seen smoking Marlboro or Camel’s from time to time, presumably when out of the country or when Silk Cut are unavailable. Despite being a chain smoker himself, Constantine does not take any other drugs, and once called his friend a “Dirty lowlife bastard” when he found a needle with a nondescript drug in it. John eventually moved in with roommate Chas Chandler, the two became best friends. Around this time John began following occult circles around London, and eventually became the magic using, demon tricking con artist he is today.

Attack Potency: Street level physically. Unknown with magic and the Twin/Moon Blade (He stabbed and killed the First of the Fallen with the Twin Blade but due to his angelic nature he became a powerless human being)

Range: Depending on what spell he is using, he can cause effects from kilometers away, otherwise generally melee range

Standard Equipment: Cigarettes | Master of the House of Mystery, which exists outside of space-time, also anyone who enters this house is bound to John to do with as he pleases. The House can also travel through Limbo to go where he wants; and additionally has its own defenses, army and can form illusions against intruders. Carries the Twin Blade which can kill anything it touches, and the Moon Blade which can entrap his enemies within it.

Intelligence: Vast knowledge of magic and magical beings, incredibly persuasive and capable of outsmarting ancient demons, cosmic beings, and reality warpers, has tricked the First of the Fallen many times, considered by the forces of Hell to be the most dangerous and cunning human alive, excellent at prep and strategy, great at psychological warfare. He once blackmailed God and even tricked the Spectre himself.

Weaknesses: Physically not very formidable, heavy smoker, many of his spells require preparations