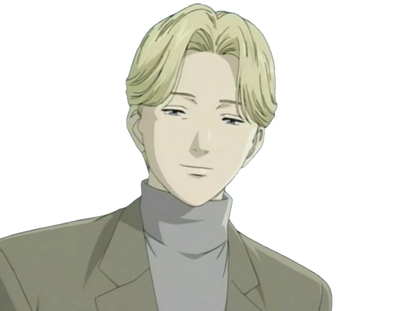 Johan Liebert is the titular "monster" and the main antagonist of Naoki Urasawa's anime and manga series Monster. Although he is most frequently referred to as "Johan Liebert", Johan is not his real name, but rather one of the many ones he uses over the course of his life.

Johan is shot in the head at a young age, but is operated on and saved from death by Dr. Kenzo Tenma. Because of this, he is very grateful to Dr. Tenma. He has spent portions of his life in different locations under different aliases and possesses an extraordinary level of charisma and intelligence. He uses his gifts to cruelly manipulate and corrupt others, often with no apparent end other than to cause suffering and destruction. His original goal, as he states when he is young, is to be the last one standing at the end of the world, though he decides upon a different fate toward the height of his acts.

Intelligence: Genius. With just his intelligence, he has brought various companies, criminal enterprises, white supremacist groups and other organizations down to their knees. At the age of ten, he managed to manipulate fifty people in 511 Kinderheim to kill each other shortly after having arrived to the orphanage. Between the ages of twelve and thirteen, he quickly learned and became perfectly fluent in English and French over the course of thirteen months, and at the age of fifteen, he started and presided over an underground bank, showcasing an in-depth understanding of mathematics, economics, trade, business, politics, management and leadership in spite of his young age. Heinrich Lunge, a man who could determine a killer's exact motives and personality by analyzing one of their crime scenes and psychologically entering their mindset, was unable to determine anything after analyzing the scene of one of Johan's crimes, eventually going as far as to say "I do not exist" when attempting to assume the latter's mentality. Hans Georg Schuwald, a prominent business figure renowned for his ability to manipulate the German economy with ease, praised Johan's knowledge of law and economics, even comparing him to the biblical Beast of Revelations and claiming him to be the beyond-human, chaotic monster he had aspired to be in years past. His mastery over psychology and analysis is such that he is able to find the root and foundation of an individual's personality within moments of meeting them, having displayed this ability countless times throughout the series.

Weaknesses: Does not value his own life due to his nihilism.