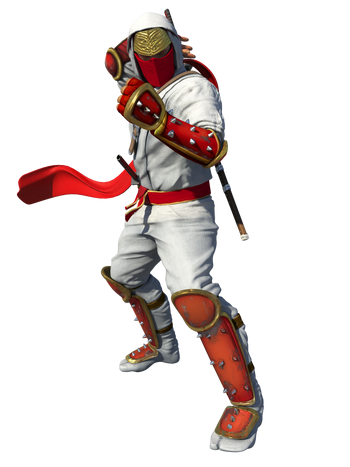 Joe Musashi is one of the main protagonists in Sega's Shinobi series of video games, first introduced in 1987. He belongs to the Oboro ninja clan, and he is skilled in the art of ninjutsu and shuriken throwing. He uses Hazy Moon, a mystical sword and Oboro clan treasure that was passed down to him by his predecessors.

A master of the shinobi arts, Joe's immense power and fighting skill have led to many tales of his valor, which have in turn made him a legend and earned him the nickname "The Super Shinobi". He has faced many vile foes, from Zeed's terrorist and ninja forces to human bio-weapons and mechanized and genetic monstrosities. Although some of his descendants have inherited his duties, Joe leads the Oboro with a fearless strength and a sense of duty.

Attack Potency: At least Small City level (Fought Hiruko Ubusuna in his prime, who while in a weaker state created a storm cloud across Tokyo)

Speed: Sub-Relativistic (Can avoid an incoming laser from Hydra)

Intelligence: High (Is a skilled combatant, master of ninjutsu and leader of the Oboro Clan ninjas. Has an uncanny knack to avoid traps)

Weaknesses: Ninjutsu lasts only for a short period of time.