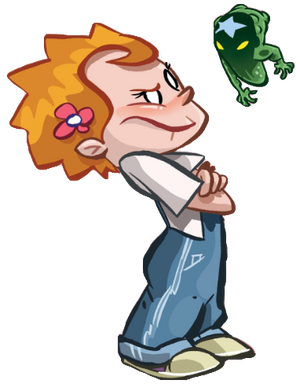 Jo Jo Wigman is a middle school student who happens to be living on top of Dr. Jekyll Formaldehyde's secret lab. Magic Pickle reveals himself to her and they soon become allies.

Powers and Abilities: Minor Durability Negation (Is able to bite through foes like the Phantom Carrot, even though the latter is able to survive being launched through walls by Magic Pickle with minimal damage) | Superhuman Physical Characteristics and Flight

Lifting Strength: Below Average (Is a child) | At least Above Average Human

Standard Equipment: The Processor | None notable

Intelligence: Likely Above Average (One of the smarter students in her grade, processed the fact that sentient produce are running amok quite quickly)

Key: Base | In the Processor

Retrieved from "https://vsbattles.fandom.com/wiki/Jo_Jo_Wigman?oldid=4791879"
Community content is available under CC-BY-SA unless otherwise noted.