VS Battles Wiki
Register
Don't have an account?
Sign In
Advertisement
in: Characters, Dragon Ball, Aliens,
and 25 more 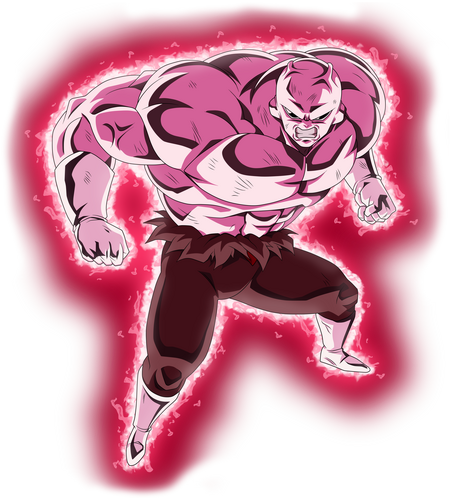 Jiren (ジレン) is a Pride Trooper and the champion of Universe 11.

Abandoned by his friends after the death of his family at the hands of an evil entity, Jiren trusts only his absolute strength to guide him to victory, and not the strength of friends or family, believing strength alone to be his salvation from failing to protect those he cared about.

The strongest adversary ever faced by Son Goku in the entirety of Dragon Ball's history, he will stop at nothing to defend his pride and the pride of Universe 11.

Powers and Abilities: Superhuman Physical Characteristics, Acrobatics, Master in Martial Arts, Flight, Spaceflight, Self-Sustenance (Type 1), Ki Manipulation (Can be used defensively and offensively, to strengthen his skin or to fire ki blasts, which can home in on targets, and form defensive barriers), Ki Sensing (Can locate others by reading their ki even if they are in a pocket dimension), Aura (Which was shown to unleash and surround himself with fire), Attack Reflection, Danmaku, Analytical Prediction, Resistance to Extreme Cold, Cosmic Radiations, Time Stop (Broke through Hit's Time-Leap), and Empathic Manipulation, Likely Non-Physical Interaction (Deflected Hit's intangible ki blast that had phased through other objects), Paralysis Inducement and Explosion Manipulation (Can trap opponents within his sphere of Ki, in which they cannot move and detonates in the end), Can possibly create dimensional rifts and even destroy space-time and pocket dimensions with his energy

Attack Potency: Universe level+ (He is repeatedly stated by Shin, Goku, and Vegeta to be the most powerful opponent Universe 7 has ever faced, as well as the mightiest foe in Dragon Ball history, putting him above even Infinite Zamasu. Shook the infinitely large World of Void with his ki alone, and is stated and shown to be far more powerful than Toppo) | At least Universe level+ (After witnessing Jiren's power which was massively held back, Whis stated that Jiren's full strength is at the level of Gods of Destruction, and could perhaps even surpass it) | At least Universe level+ (After powering up several times and finally being overwhelmed by a mastered Ultra Instinct Goku, Jiren too broke his limits and increased his power even further, matching Goku with every strike and even overwhelming him at some points, although he was eventually knocked down by Goku after the latter became enraged)

Speed: Massively FTL+ (At least 196 quadrillion c, likely at least 39.2 sextillion c. Far superior to characters such as Toppo, Kale and Maji Kayo. Blitzed SSB Evolution Vegeta and Ultra Instinct -Sign- Goku at full power. After breaking his limits, he was even able to keep up with and even overwhelm a mastered UI Goku)

Intelligence: As the strongest warrior of Universe 11, he is far more adept in combat than any of his fellow Universe 11 fighters, and possesses far more combat experience than all of them individually or as a group

Power Impact: Jiren fires a burst of energy at an opponent, which expands greatly and "grabs" the target. It then travels some distance away before detonating on a massive scale.

Power Impact Orb Version: Jiren wraps his opponent in energy, forming a powerful radial orb that detonates on top of its target.

Energy Punches: Jiren gathers energy into his fists, vastly increasing the power of his attacks.

Energy Barrier: The raw power and intensity of Jiren’s ki is enough to ward off weaker attacks without effort. At more intensive levels of power, the barrier can easily repel multiple energy attacks at once. It can also block physical attacks.

Invisible Eye Blast: A powerful shockwave attack released from the eyes, utilized to deflect attacks as well as land several invisible "punches" on an enemy.

Weaknesses: His own pride, which keeps him from empathizing with others' desperation.

Toffee (Star vs. the Forces of Evil) Toffee's Profile (Both were Low 2-C, and speed was equalized)