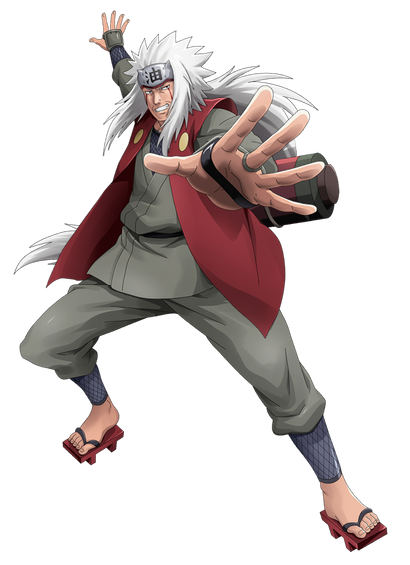 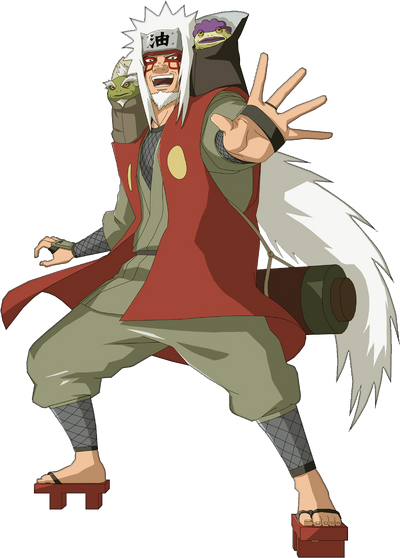 Jiraiya (自来也, Jiraiya) was one of Konohagakure's legendary Sannin. He was also known as the Toad Sage (蝦蟇仙人, Gama Sennin) because of his special affinity for toads. Famed as a hermit and pervert of stupendous skill, Jiraiya traveled the world in search of knowledge that would help his friends, the various novels he wrote, and, posthumously, the world in its entirety – knowledge that would be passed on to his godson and final student, Naruto Uzumaki.

Superhuman Physical Characteristics, Chakra Manipulation and Control, Master Hand-to-Hand Combatant, Weapon Mastery, Acrobatics, Stealth Mastery, Breath Attack, Invisibility, Fire Manipulation, Sealing, Water Manipulation, Air Manipulation, Earth Manipulation, Energy Projection, Paralysis Inducement(with Paralysis Jutsu), Speed Enhancement with Shunshin, Oil Manipulation, Yin Manipulation, Yang Manipulation, Surface Scaling, BFR with Toad Gourd Prison and Toad Mouth Bind, Shapeshifting (Can transform into animate and inanimate objects), Statistics Amplification (Can use chakra to augment his speed and physical capabilities), Summoning (Can summon toads of varying sizes, some of which can crush and flatten targets from above, utilize illusions, spew oil from their mouths, manipulate fire, levitate, skillfully wield weapons, cover a wide area and restrict the movements of opposing targets, among other things), Body Control, Hair Manipulation (Can use his hair to bind targets, harden it into needles and fire them, and use it for defensive purposes), Acid and Poison Manipulation with Toad Mouth Bind (Can summon a giant toad's stomach, the air within is filled with an acidic poison that begins to paralyse a person's entire body after ten minutes of continuous exposure), Duplication (Can create shadow clones that can utilize his techniques, act as decoys and distractions, among other things), Barrier Creation (Can create a barrier that allows him to detect any moving thing in its interior, which he can also expand at will), Mind Manipulation and Mind Based BFR (With Ma and Pa), Shadow Manipulation (Can temporarily merge with his target's body, allowing him control over their mind and body), Transmutation (Can transform targets into frogs upon direct contact), Resistance to Illusion Creation, can replace himself with inanimate objects to avoid damage

All previous abilities greatly increased, Transformation, Enhanced Senses, Extrasensory Perception, Absorption (Can absorb natural energy from his surroundings), Limited Transmutation and Petrification (Opponents who absorb excess amounts of natural energy from him without the ability to properly balance it will subsequently be turned to stone and into a frog)

Intelligence: Gifted (Despite his pervert nature, he knows a lot of seals, an expert in infiltration missions and fighting skills).

Weaknesses: Can't maintain Sage Mode on his own for a substantial period. He has to hold his breath to retain control over his target's mind and body.

Kuchiyose no Jutsu (Summoning Technique): The Summoning Technique is a space-time ninjutsu that allows the summoner to summon animals or people across long distances instantly. Jiraiya uses this to summon frogs, such as Gamabunta, and can also summon shadow clones from a different location.

Rasengan: A sphere of chakra energy that can create a large explosion and damage the inside of a target. Needs to close to melee range to use it.

Sennin Mode (Sage Mode or Hermit Mode): The result of using natural energy along with a ninja’s normal chakra in perfect balance to drastically empower their abilities.

Flame Bullet: This technique is executed by the user gathering oil in their mouth which is created by chakra, spitting it out, and igniting it. This technique shoots a flame bullet at the enemy.

Sage Art: Goemon: This technique is a collaboration technique used by Jiraiya with Shima and Fukasaku.

Swamp of the Underworld: By changing the surface of an object beneath an enemy into mud and creating a swamp, the user can sink his enemy into the mud.

Shadow Manipulation Technique: After infusing chakra into the victim's shadow, the user makes their own body as flat as possible. Then, by becoming one with the shadow, this technique temporarily establishes control over the victim's mind and body. While the technique is in effect, the victim is momentarily stunned and can serve as a human shield.

Turning into a Frog Technique: By touching the forehead of a target and then, according to a mental image the user forms, the target changes into a frog.

Hiding in a Toad Technique: The frog can dive up to a hundred meters in fresh water, making it especially useful for infiltrating enemy camps that are surrounded by a river or a lake. The stomach of the frog also has a unique barrier that obstructs chakra, protecting the user from detection-type ninjutsu.

Toad Confrontation Chant: Jiraiya used this technique with the help of Fukasaku and Shima during the fight against Pain. It is a sound-based genjutsu passed down on Mount Myoboku. Because learning it requires many long years of training, only the Two Great Sage Toads, Fukasaku and Shima, have the skills to perform it.

Barrier: Toad Gourd Technique: Jiraiya summons a small toad that pulls enemies into its stomach, a space which is much larger than the toad with gastric acids inside.

Summoning: Toad Mouth Bind: Jiraiya summons the oesophagus of a toad which changes the surroundings around him. Making it much harder to move, he can control this any way he wants and can reverse summon it to BFR opponents. This section of the toad contains stomach acid, and the air within is filled with an acidic poison that is colourless and odourless, making it difficult to detect. Though it can be endured in small amounts, this poison begins to paralyse a person's entire body after ten minutes of continuous exposure, indiscriminately affecting anyone contained within the stomach. 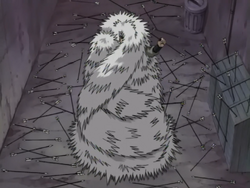 Needle Jizo
Add a photo to this gallery