VS Battles Wiki
Register
Don't have an account?
Sign In
Advertisement
in: Characters, Female Characters, RWBY,
and 12 more 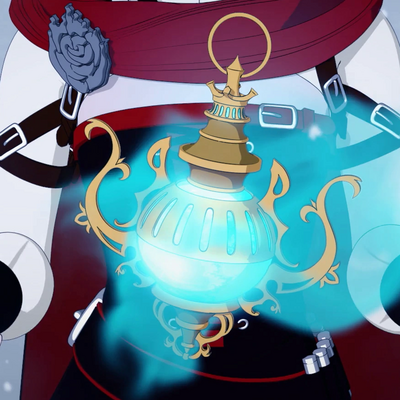 Jinn is a spirit that resides in the Relic of Knowledge, one of the four Relics created by the God of Light after his departure from Remnant. She can be summoned by the user calling out her name, at which point she can answer three questions every one hundred years.

Powers and Abilities: Knowledge Embodiment (The Relics are the physical manifestation of the four gifts to Humanity), Abstract Existence (Type 2), Large Size (Type 0), Possibly Self-Sustenance (Type 2; Resides for long periods of time in her Relic without the need for substance), Magic, Retrocognition (Is able to perceive both the past and present), Perception Manipulation, Smoke Manipulation and Illusion Creation (Shows visions of the past when answering questions), Time Stop, Status Effect Inducement (People in her visions are implied to be unable to interact with one another or even move in the real world)

Attack Potency: Unknown (Has shown no destructive feats and wasn't seen in a fight)

Intelligence: Nigh-Omniscient (Has complete knowledge of the past and present, but not the future)

Weaknesses: Incapable of telling the future. Bound to the Relic of Knowledge and can only be summoned when her name is invoked.