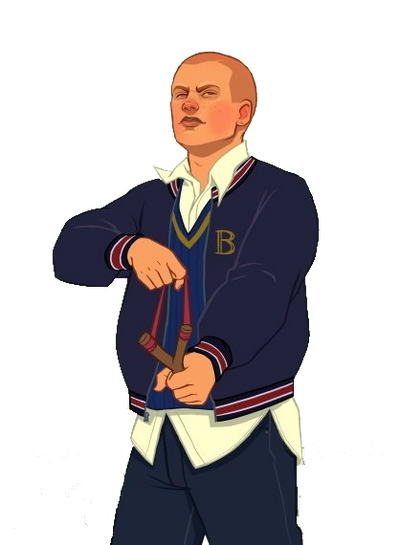 James "Jimmy" Hopkins is the main protagonist of the 2006 video game, Bully. He is a notorious rough-mannered 15-year-old troublemaker who was dumped at Bullworth Academy by his recently remarried mother and his wealthy stepfather. In the past, Jimmy was expelled from seven different schools for a multitude of reasons, most notably graffiti, vandalism, initiating fights, and according to some, arson. Bullworth is Jimmy's last chance if he doesn't want to get booted to juvenile detention, but knowing the school's reputation, he prepares for the worst.

Despite Jimmy's short, stocky stature, he makes up for it with his incredible strength that makes him far superior to that of the average teenager. Throughout the story, he also proves himself to be smarter than people credit him for, and both his strength and intelligence eventually bring peace to Bullworth.

Tier: 9-B, higher with weaponry

Attack Potency: Wall level (Defeated Russell Northrop, who tanked an explosion strong enough to level a metal gate. Faced off against an entire football team of jocks, all of which should be comparable if not superior to Dan Wilson, and came out on top. Traded blows with enemies capable of harming him. His battle with Gary destroyed several wooden platforms. Stronger than Hal and Norton, who can casually tip large trees over. Can severely mess up cars, dent metal and smash large windows to pieces with his punches), higher with weaponry (Does far more damage. Firecrackers and Spud Guns can now pulverize a marble column in one-hit instead of requiring two strong punches)

Speed: Peak Human (Capable of casually outrunning most characters including police officers and the Jocks. Can outrun speeding mopeds and cars moving at moderate speeds) with Superhuman combat and reaction speed (Comparable to Norton. Can react and dodge attacks from Earnest's turret)

Lifting Strength: Peak Human (Comparable to Norton who can effortlessly swing a massive hammer. Can easily pry open metal gates and garage doors. Can rip off large steel pipes off of walls)

Striking Strength: Wall Class (Defeated Bif in a boxing match. Collapsed a small, fragile house-like structure by repeatedly punching it. Can pulverize a marble column with only a few punches)

Durability: Wall level (Can withstand attacks from people comparable to him, and some of his own weapons. Took a beating from Russell Northrop who can crack solid concrete walls and break open a locked gate with his head. Survived a fall from several floors with no visible injuries. Survived crashing through a glass ceiling and into a room without a scratch on him. Was bashed in the skull with a sledgehammer and thrown through walls in his battle against Norton, only to get back up completely fine. Survived large, metallic bells falling on him. Took hits from Earnest's turret. Capable of taking hits from a Spud Cannon that was able to damage and blow through the locks of a metal door)

Stamina: Very high (Defeated Bif in a multi-round boxing match, only to fight off against multiple preppies and later Derby right after. Shown to have more stamina than the students, school faculty and even police officers, all of whom get winded after running for too long. Capable of fighting for hours on end. He can sprint, swim and cycle as much as possible without showing any sort of exhaustion. Jimmy possesses a strong will, as even when he is outnumbered in a fight, he never gives up and always ends up on top, as seen during his fights with the Nerds, Preps, Greasers, Townies and the school riot, which lasted a few or up to several hours until nighttime)

Intelligence: Gifted (Despite how he's depicted as, he is surprisingly level-headed and possesses a sense of maturity which most of his peers lack. A problem-solver and quick-witted, knows how to use the environment to his advantage and can quickly turn the tide of battle. Capable of excelling and passing all of his classes. Has a great sense of balance)

Standard Tactics: Jimmy is a dirty fighter who is never willing to surrender, and he will do whatever it takes to quickly take out his opponent. He is very willing to lead with his weapons and martial arts. With weapons, he will try to stay out of range from his opponent.

Weaknesses: Short tempered and somewhat gullible (Easily got tricked by Gary Smith, the preps and his teachers, however he was smart enough to see through Lola's manipulative tactics). Otherwise, none notable.