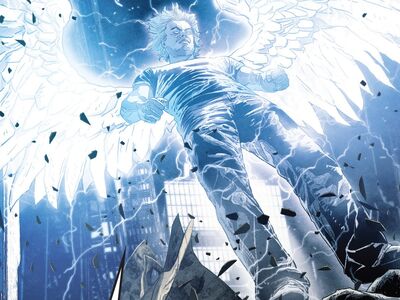 Jim Downing was a mystery to everyone, including himself. He was comatose in a New York City hospital for years and when he finally awoke, he became the newest Spawn.

He was originally a scientist named Kramer who worked for Jason Wynn, until Wynn had him killed. His soul bounced from Heaven to Hell until he was bound to Simmons and stuck on Earth.

Attack Potency: Solar System level (Said to be one of God's most powerful angels, should not weaker than Angela.)

Speed: At least FTL (Powerful angels can easily fly across the universe)

Intelligence: Highly skilled fighter and was a scientist.

Retrieved from "https://vsbattles.fandom.com/wiki/Jim_Downing?oldid=5875524"
Community content is available under CC-BY-SA unless otherwise noted.