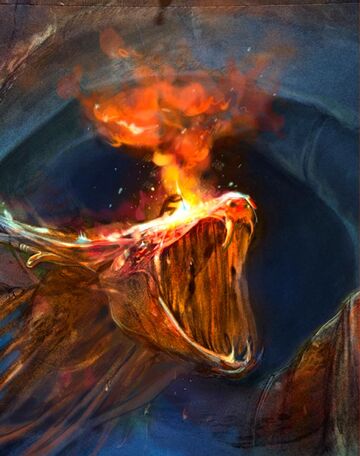 The Jills, also called the Minute-Menders, are the matronly attendants of the Dragon God Akatosh. Though they are often referred to as "female dragons", the Jills are in fact cosmic entities tasked with maintaining the stability and linear order of time, fixing all paradoxes and branching contradictions that arise whenever mortals meddle with the flow of time. To do so, the Jills act as Akatosh's seamstresses, continuously weaving, cutting and re-knitting the fabric that makes up the Dragon's tapestry. However, the Jills are often lazy and reckless in their work, and therefore rarely mend the wounds of time with precision, leading to the continued existence of paradoxes and contradictions in the timeline even after they finish sewing it.

Name: The Jills, The Minute-Menders

Gender: Inapplicable. Referred to as female.

Attack Potency: Universe level+ (Capable of manipulating the very fabric of time, weaving, cutting and stitching it into new forms and patterns. Responsible for mending Dragon Breaks, events wherein the linearity of Nirn's timeline shatters and the world momentarily returns to a state of non-linear untime, by weaving the broken tapestry of time back together, correcting any and all contradictions and paradoxes that occurred during it)

Speed: Immeasurable (Exist outside and beyond linear time, and can travel through its currents at will. Unaffected by Dragon Breaks, and capable of mending them)

Intelligence: Incredibly High. Immortal entities with vast cosmic knowledge and understanding over the flow and nature of time itself.

Weaknesses: Somewhat lazy and bad at their job, which often results in time paradoxes being left unmended.

Retrieved from "https://vsbattles.fandom.com/wiki/Jills?oldid=4557741"
Community content is available under CC-BY-SA unless otherwise noted.