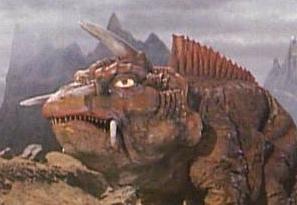 Jiger is a kaiju created by Daiei Film which first appeared in the 1970 Gamera film, Gamera vs. Jiger.

Jiger is a large, quadrupedal reptile, with a head adorned with quills protruding from her face. Along her back is a long dorsal fin, and on sides of her body, behind the head, are a pair of organic thrusters that enhance her jumping ability and is also the first female kaiju in the Gamera series.

Jiger is a bizarre creature with bizarre powers. She can fire projectile quills from her nose that have deadly penetrating power. In addition, she can fire an energy beam from her head that can vapourize a whole city block and all the people in it. Finally, nestled within her tail is a secret weapon - a stinger-like ovipositor which can inject an egg in order to breed. She can use a form of suction to hold an opponent in place to inject said egg. This parasite can render her opponent comatose within minutes.

Jiger's weakness lay in an ancient statue which emanated a wavelength to which Jiger was susceptible. When this statue was dug up for the 1970 World's fair, she was released, but in the end, Gamera recovered the statue and killed her with it, by using it to stab her in the head.

Durability: Multi-City Block level (Survived some of Gamera's flames along with a factory explosion and a fall from the sky with the crashing impact that blew up some buildings)