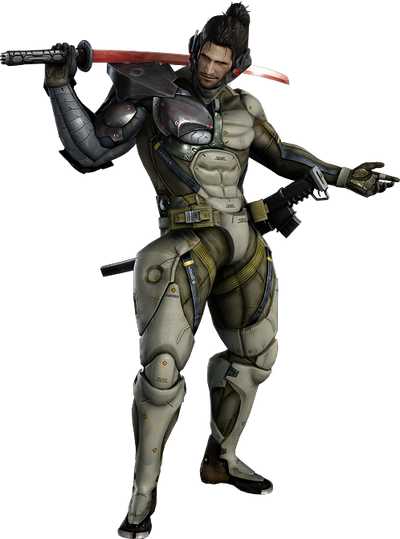 Samuel Rodrigues was a cyborg swordsman involved with the Desperado PMC group who fought against Raiden during the events of 2018. He was a master swordsman of the "Rodrigues New Shadow School" technique, which had derived from the "Yagyū Shinkage-ryū (Yagyu New Shadow School)" of Japan. His codename was Minuano, named after the cool Brazilian wind, and was also nicknamed "Jetstream Sam". Following his loss to him in combat, Sam joined up with Senator Armstrong.

Powers and Abilities: Superhuman Physical Characteristics, Partial Cyborgization (After fight with Armstrong, Sam got a cyborg hand), Healing (With Repair Nanopaste), Enhanced Acrobatics (As seen here. Can also do double-jumps), Can replenish his power via absorbing the fuel cells/electrolytes of slain enemies, Master Swordsman, Durability Negation through Vibration Manipulation and Quantum Manipulation with High-Frequency blade (HF weapons vibrate extremely fast, allowing them to disrupt atoms with ease by shrinking their electron clouds. HF weapons can also cause changes to their blades particles at a quantum level, as well as cause quantum decoherence in the plank scale), Skilled Hand-to-Hand Combatant, Can create vacuum blades with his swings to slice foes at a distance, Information Analysis (Deducted the nature of Raiden's technique as well as his internal struggle just by sparring with him for a few seconds, his Blade Mode automatically analyses the ideal cutting position in order to maximize damage), Can enter "Blade Mode" to speed up his reactions and combat speed to the point that time seems to be slowing down around him, Smoke Manipulation (Via Smoke Grenades), can set his sword on fire (As seen here), Electromagnetism Manipulation (With Electromagnetic grenades), Explosion Manipulation (With Grenades), High pain tolerance (Could endure Armstrong's stab in his arm and shrug off Raiden slashing his chest mid-fight. Possibly has pain inhibitors after his cyborgization), Resistance to Extreme Heat (Capable of surviving RAY's plasma) and possibly Empathic Manipulation after his cyborgization

Attack Potency: At least Small Town level+ (Fought against a casual Armstrong, who is stronger than the EXCELSUS), likely Large Town level (Fought on par with Raiden and can damage him with his bare hands), his Murasama Blade ignores conventional durability (HF Blades disrupt any atoms they come into contact with)

Speed: Sub-Relativistic normally (Capable of matching both Raiden and a casual Armstrong), at least Sub-Relativistic with Blade Mode (Should be comparable to Raiden, as it functions much the same way.), higher with Quick Draw (Cut off Raiden's arm before he could react, severed Armstrong's arm before his nanomachines could harden, something that Raiden and Sam's Blade Modes aren't fast enough to do)

Durability: At least Small Town level+, likely Large Town level (Took a few casual blows from Armstrong, but was almost knocked out by them)

Stamina: Very high (He has no issues with keeping up with Raiden or even Armstrong, albeit his damage soak is less due to his still-human organs)

Intelligence: As an (unofficial) member of the Winds of Destruction and the Master of the Rodrigues New Shadow sword technique, Sam is a fearsome opponent on the battlefield, easily outmatching Raiden in their first encounter and managing to slice off Armstrong's arm during their duel. Even before then, he was skilled enough to kill ten armed mobsters with only his sword, a feat made more impressive by the fact that cyborg enhancements were not readily available at the time. Aside from his combat skill, he also possesses a keen wit and a remarkably sarcastic sense of humor, making accurate inferences on Raiden's history and hidden personality as Jack the Ripper as well as taunting his opponents into charging at him recklessly before going for the kill. He is capable of matching opponents who are physically superior to him through sheer swordsmanship alone. He's a master of Brazilian Kenjutsu, a very unpredictable sword fighting style that incorporates kicks, punches, and throws, making him a formidable hand to hand combatant.

Weaknesses: Sam enjoys taunting his opponents more often than not, which can anger them to the point of backfiring. His body is almost entirely human; thus, he could be killed by what would be just superficial damage to cyborgs. He enjoys the thrill of a fight and may drag it out if he finds it enjoyable. He is somewhat arrogant and complacent at times, as he was assured of his victory over Armstrong and was taken by surprise when the latter continued to persist.

Vacuum Slashes
Add a photo to this gallery

Note: The equipment section also details the equipment he procured during his raid at World Marshall's HQ, which occurred two years before the main story of Metal Gear Rising. It is uncertain if he carries anything besides his sword during the events of the main game, and as such, it is advised that the OP specify if he has access to it during a match.