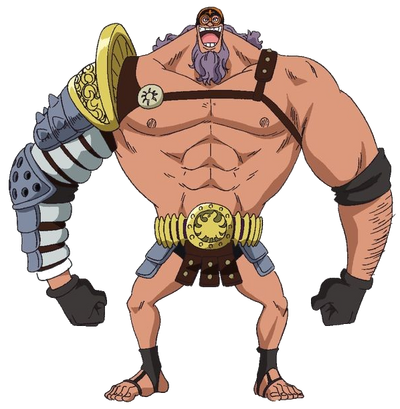 Jesus Burgess, nicknamed "Champion", is the helmsman and captain of the First Ship of the Black Beard Pirates. During this time his bounty was of 20,000,000 belly.

Due to his actions, he is a major antagonist in the Marine Ford, and the tertiary antagonist of the Dressrosa Arc.

Classification: Human, Captain of the First Ship of the Black Beard Pirates, Helmsman

Attack Potency: Likely Mountain level (Fought against and did light damage to Sabo. Was stated to be a threat by Sabo and matched him for several minutes off-panel)

Speed: At least Massively Hypersonic+ (Can keep up with Sabo)

Striking Strength: Likely Mountain Class (Capable of clashing with Sabo, though at the cost of his armor breaking)

Durability: Mountain level (Took a number of strikes from Sabo's Mera-Mera no mi and Haki infused strikes and remained conscious and previously survived a shockwave from Sengoku, though he suffered great damage)

Intelligence: Above average in terms of combat, Average outside of combat

Weaknesses: His brutish and prideful nature can get the better of him