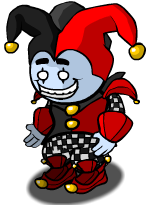 A scarring past is how the Jester became to be, born in the town of Salem. Once the jester became an adult, the jester was sent away from being conscripted as a soldier to fight in a bloody war. After years in the battlefield, the sight of his fellow soldiers dying, and along with the war experience had left him paranoid. The jester’s paranoia never went away and remained with him for years after when he was sent back to his hometown, Salem. Everyday, the jester experienced his traumatic memories of the battlefield, and twisted envisions that everyone in town is out to kill him. The memories of the traumatic experience and the fear that comes with it, makes it hard for the jester to bear to live, and would rather accept to be killed and be liberated from himself, than to live with his paranoia, making him become a target wanting to be lynched.

Attack Potency: Human level physically. Unknown via Haunt (The Jester is capable of imbuing their target with a guilt so immense it that effects those that completely lack a moral compass, like the Serial Killer, Arsonist, and the Werewolf. This guilt is extremely powerful, and forces the target to commit suicide, bypassing conventional durability)

Durability: Human level | Unknown (As a ghost, the Jester doesn't have a physical form to harm, making him hard to kill)

Range: Standard melee range, unknown with Haunt (The Jester's target suffers its effects regardless of their location)

Intelligence: Likely Below Average (In constant paranoia, and in a state of insanity)

Weaknesses: Their Empathic Manipulation is reliant on them being killed in a fashion that is discriminant, such as an execution. Therefore, non-discriminant killers such as the Serial Killer bar him from using this ability.

Start a Discussion Discussions about Jester (Town of Salem)