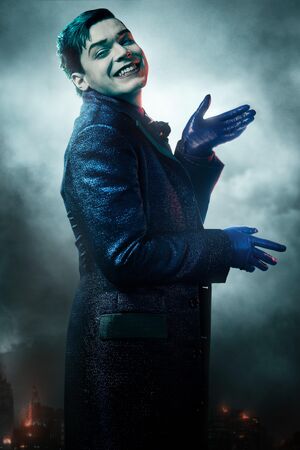 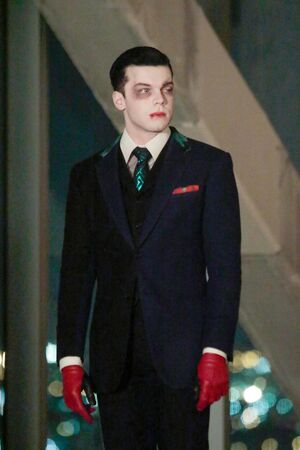 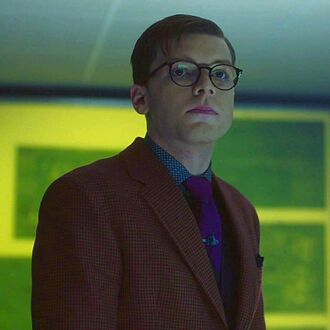 Along with Jerome, Jeremiah is an interpretation of Batman's archenemy The Joker, and will take on more elements of the character before finally becoming the fully formed character.

Jeremiah is a terrorist, criminal and murderer. He is also the more arrogant and obsessive identical twin brother of the anarchistic cult leader, Jerome Valeska. After Jerome's death and being exposed to his altered chemical laughing toxin driving him to insanity, Jeremiah takes over the role of main antagonist for the final arc of Season Four and a major antagonist in Season Five.

He is portrayed by Cameron Monaghan, who also portrayed Jerome Valeska in the same franchise.

Attack Potency: Street level physically, higher with weapons (Is a skilled fighter capable of harming the likes of Bruce Wayne and is roughly comparable to him. Broke off a metal railing on accident. Managed to pin Tabitha to the ground after stabbing her with her own karambit knife), Building level, possibly higher via bombs and explosives (Generator bombs are strong enough to destroy Gotham's main bridges and the Clock Tower, turning the city into a No Man's Land. Destroyed Wayne Manor with explosives)

Durability: Street level (Endured multiple punches from Alfred without showing any sign of discomfort and was barely stopped by a shotgun blast to his shoulder)

Intelligence: Genius. Jeremiah is shown to be highly intelligent. Since he was a child, he used to draw mazes, and when he grew up, after having the best grades at school, he built one in his house, which he built underneath the woods. Furthermore, he is extremely manipulative as he was able to keep anyone from discovering his insanity for years, even after it was brought to the forefront by Jerome's gas, and he was able to convince everyone that he was Jerome in the tapes he sent to Jerome's followers and the GCPD. Jeremiah also claims to be "vastly more intelligent" than Jerome was. He is a brilliant engineer, designing advanced generators capable of powering Gotham that could double as powerful explosive devices.

Weaknesses: Normal human weaknesses. Mental instability. Extremely arrogant and totally obsessed with Bruce Wayne whom he sees as the brother he never had and will do anything to prove that he is essential to his life.