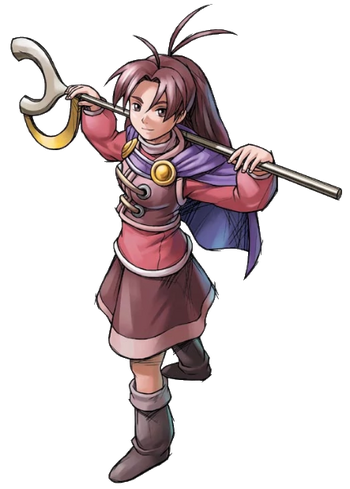 Jenna is a childhood friend of Isaac and Garet, and the brother of Felix, all from the village of Vale. Her, along with Isaac, Garet, and Kraden, went to the Sol Sanctum to study the secrets of Psynergy and Alchemy, using the excuse that they were confirming whether or not Saturos and Menardi were in the sanctum, before. Her and Kraden end up getting kidnapped by them so that Garet and Isaac will bring them the last Elemental Star. She ends up becoming somewhat fond of them, going along with their plan. In Golden Sun: Dark Dawn, it is shown that Isaac and her got married and had a child named Matthew.

Speed: Massively FTL+ (Can keep up with Isaac)

Intelligence: Gifted. Jenna was a student of Kraden alongside Garet and Isaac. She's also an excellent fighter, puzzle solver, alchemist, and Psynergy Adept. And upon being kidnapped by her brother and the other Mars Adepts, she learned the truth about the falling world very quickly and knew collaboration was the best key.

Retrieved from "https://vsbattles.fandom.com/wiki/Jenna_(Golden_Sun)?oldid=5948901"
Community content is available under CC-BY-SA unless otherwise noted.