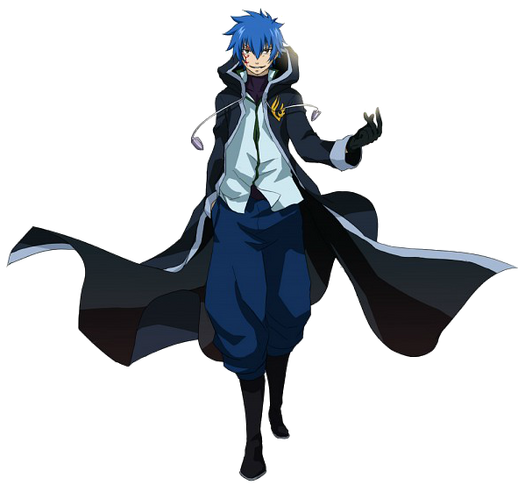 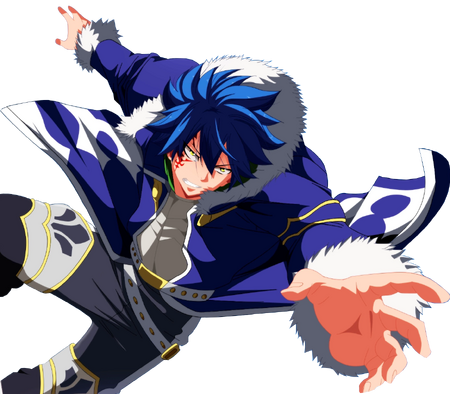 Jellal Fernandes (ジェラール・フェルナンデス Jerāru Ferunandesu) is a childhood friend of Erza Scarlet. Before he lost his own memory, he was a Dark Mage who desperately sought to revive Zeref via the R-System. Jellal currently serves as a member and co-founder of Crime Sorcière.

Stamina: Very high (Was able to help Natsu Dragneel enter Dragon Force despite recently casting a Self-Destruction Spell on himself, something which significantly weakened him)

Intelligence: Genius (Jellal is a smart, cunning and resourceful individual who displayed particular skill in deception, having been capable of fooling both Erza Scarlet and the entirety of the Magic Council, even managing to become a member himself. He has shown himself capable of creating ingenious schemes and planning ahead, being the schemer of the plan to revive Zeref, whom he believed dead, and tricking the Council into unintentionally working for him and launching an Etherion)

Heavenly Body Magic (天体魔法 Tentai Mahō): It is a powerful Magic based around astronomical objects, such as meteors, stars, and black holes. Jellal generates and manipulates the energy of stars from his body and uses it against his enemy. Jellal has shown tremendous mastery over this particular form of Magic.

Thought Projection (思念体 Shinentai): Jellal is capable of creating a Thought Projection of himself, and is very skilled at doing so, having been able to fool the Magic Council into believing that his projection was actually a separate being from him, and managing to grant it membership to both the Magic Council and the Ten Wizard Saints. His projection is also able to don an attire different from Jellal's own.

Darkness Magic (闇の魔法 Yami no Mahō): Jellal, due to his "possession" at the hands of "Zeref," is an expert in the usage of Darkness Magic. He was shown using almost exclusively this form of Magic for all of his fight with Erza, in which he proved himself capable of creating the ghostly entities characteristic of this form of Magic, using them to both hit and immobilize her with great skill. Also, as a child, he could employ Darkness Magic in other, more unusual ways.

Darkness Cage
Add a photo to this gallery

Fire Magic (火の魔法 Hi no Mahō): Jellal can use Fire Magic, a form of Magic which, as the name implies, allows the user to generate, manipulate and control fire. His mastery over this magic is enough for him to cast Abyss Break on his own. 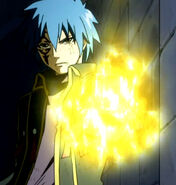 Flame of Rebuke
Add a photo to this gallery

Earth Magic (土魔法 Tsuchi Mahō): Jellal can use Earth Magic, a form of Magic which, as the name implies, allows the user to generate, manipulate and control earth. His mastery over this magic is enough for him to cast Abyss Break on his own.

Water Magic (水系各種魔法 Mizu Kei Kakushu Mahō): Jellal can use Water Magic, a form of Magic which, as the name implies, allows the user to generate, manipulate and control water. His mastery over this magic is enough for him to cast Abyss Break on his own.

Wind Magic (風魔法 Kaze Mahō): Jellal can use Wind Magic, a form of Magic which, as the name implies, allows the user to generate, manipulate and control the wind. His mastery over this magic is enough for him to cast Abyss Break on his own.

Bind Snake (拘束の蛇 Kōsoku no Hebi): This spell appears in the form of a snake tattoo. The snake winds its way around the target's body, tightening and restricting movement. Jellal used this on Erza to immobilize her for the sacrifice ceremony to revive Zeref.

Self-Destruction Spell (自律崩壊魔法陣 Jiritsu Hōkai Mahōjin): An incredibly complex spell which Jellal used in an attempt to destroy Nirvana and commit suicide. Without knowledge of its cancellation code, it cannot be dispelled. However, the spell's creator and the one who taught it to Jellal, Brain, was able to dismiss this Magic without any need for the code.

Jellal's Self Destruction Spell
Add a photo to this gallery

Telekinesis: Jellal has shown the ability to move objects around in the air without touching them, being capable of doing so even through his Thought Projection, Siegrain, making a book he was reading float back to its place on the bookshelf. Offensively, Jellal has proven himself capable of moving a target around in any desired manner. By moving his hand in the direction he wants it to move, he blows the target away as if he were hitting them. This will seemingly produce an invisible, powerful blunt attack to strike the target; an offense which is strong enough to kill opponents, causing their blood to spill out.

Telepathy (念話, テレパシー, Terepashī): Jellal has shown the ability to be able to communicate telepathically with others, disallowing any "jacking" of his communication to occur.

Magic Staves: While disguised as Mystogan, Jellal is shown to be able to use the same Magic as his Edolas counterpart.