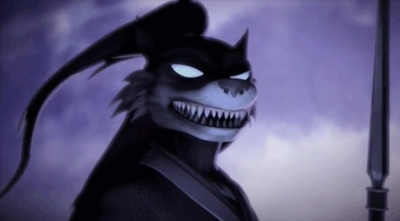 Jei is a blind samurai with powerful dark magic. While his origin is currently unknown, he claims to be an emissary of the gods, killing people he believes to have evil desires. However, he kills anyone who he sees fit. After confronting Usagi Miyamoto, he summoned Leonardo, Donatello, Raphael, and Michelangelo into his reality and controlled their minds in order to murder Usagi.

Name: Jei, The Blades of the Gods

Attack Potency: At least Small Building level (Easily defeated Usagi in their first confrontation, who managed to hold his own against the turtles. Fought against all four turtles)

Speed: At least Supersonic (Managed to keep up with all the turtles at once)

Durability: At least Small Building level (Withstood being impaled in the chest by Leonardo's sword)

Weaknesses: Eliminating his spirit outside of his body would result in his death.

Retrieved from "https://vsbattles.fandom.com/wiki/Jei?oldid=5961621"
Community content is available under CC-BY-SA unless otherwise noted.