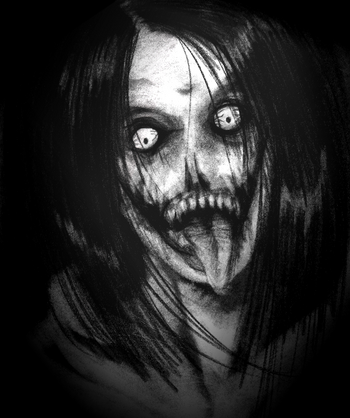 Jeff the Killer is the unnamed antagonist of the short story Right On Time, that was published in the anthology novel: The Creepypasta Collection. The story's protagonist is an unnamed man, who is a sadistic murderer. He was stalking stalking his ninth victim. When he broke into the woman's house, he begins to feel uneasy. Then he finds the corpse of his would be victim, with the message "RIGHT ON TIME", showing him that someone or something knew he was coming. He tried to run, but was shocked to quickly get a knife in the back. He was quickly overpowered, and the monstrous thing growled to him "Go to sleep". He then died. This monster was Jeff the Killer.

Name: Jeff the Killer (though his name is never stated in the story), "It"

Age: Unknown (Though is thought to be a teenager or a young adult by the protagonist)

Powers and Abilities: Peak Human Physical Characteristics, Stealth Mastery (Easily broke into a house multiple times without being noticed, and stalked a the protagonist for many weeks without being noticed. Can move completely silently), Weapon Mastery (Skilled with his 8-inch Bowie knife), Enhanced Senses (Easily could stalk the protagonist, who also was skilled in stealth, when he is hiding in the darkness. Unaffected by working in the dead of night), Body Control (Can contort and twist his spine like a snake), Preparation (Is comparable, if not superior to the story's protagonist)

Attack Potency: Street level (Superior to the protagonist, being able to casually man-handle him. The protagonist could easily overpower adult women, and could break a door down if he had to. This would require him to break the door's hinges, lock, or door frame, all which are around this level. Knife could easily pierce the protagonist's spine and could slice fingers, toes, and flesh cleanly off. Average blades are this level)

Speed: Peak Human (Rushed the protagonist without him being able to react. The protagonist is stated to potentially be able to attack his victim before she could react)

Lifting Strength: Peak Human (Easily overpowered and knocked around the protagonist. The protagonist strictly relied on strength when making his murders, strangling and overpowering his victims)

Striking Strength: Street Class (Was able to pin the protagonist down with one foot)

Intelligence: At least Above Average, likely Gifted (Is at least comparable to the protagonist, if not a bit above. The protagonist memorized a woman's entire routine after watching her for three weeks. This was to the point of knowing the exact times she would do certain actions and how long the actions would take. This also includes knowing things like how she orders her coffee, what shows she would watch, who she hung out with, and her small quirks. He got away with killing nine other women, never even being suspected for murder. He always planned out every action of his murders with meticulous precision. He also planned for almost every outcome, accept he was outsmarted and killed by Jeff)

Standard Tactics: Given time, Jeff will stalk his opponent, meticulously studying them. He will try to see how they operate, how they think, and how he can potential exploit that. In a straight up fight, it depends on the distance. He will start with stealth if he is out of his opponent’s sight, moving around silently, until he gets the drop on his prey. From there, he will go for an attack that will cause a lot of pain, due to his sadistic nature. A move that will inhibit or impare the opponent from making a counter attack. This is usually done with his blade. If he starts closer, he will rush his opponent and grapple them. He has been shown to use his strength to pin down or restrain an opponent, allowing him to open up with his knife. In all situations, he will finish off opponent, usually rather quickly, telling them to "Go to Sleep".

Right on Time
Censored version of the story.
Add a photo to this gallery

The Chaser (Slender: The Arrival) The Chaser's Profile (Speed was equalized, and Jeff's knife was restricted)

Start a Discussion Discussions about Jeff the Killer (The Creepypasta Collection)