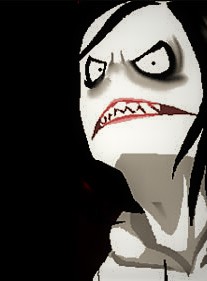 Jeff the Killer is the main antagonist of the game ISOLATION and its sequel OBSESSION.

Classification: Ghost of a serial killer

Powers and Abilities: Superhuman Physical Characteristics, Blood Creation (Causes red hand prints to appear on mirrors, bloody messages to appear on the floors, for blood to cover bathtubs etc), Teleportation (Of himself, objects, and others), Stealth Mastery, Minor Telekinesis (Of small or medium size objects), Skilled Knife Wielder, Immortality (Type 7; Died in a maximum security prison when it burned down, this was before the time period of the games), Fear Inducement (Presence causes paranoia and fear), Illusion Creation (Visual and Auditory), Light Manipulation (Can causes lights to flicker), Sleep Manipulation (In the second game Jeff seems to cause the protagonist to sleep for three days straight and he was able to manipulate her dreams), possibly Non-Corporeal (Is assumably a spirit), limited Technology Manipulation (Causes all the clocks in the first game to stop at 12:00, turned all the power off in Ren's Hotel through unknown means), and Reality Warping (Causes the sky to become red, seems to be somewhat in control of the buildings he inhabits in both ISOLATION and OBSESSION. Recreated his room from the maximum security prison where he died)

Attack Potency: Wall level (Easily kills the protagonists; Protagonists destroy large boulders with one swing from a hammer), possibly Large Building level (Seems to be able to control some of the happenings in the mansion-esque house of ISOLATION and Ren's Hotel in OBSESSION)

Speed: Unknown, possibly Athletic Human (Can keep up with the protagonists)

Striking Strength: Wall Class (Can break down a wooden door)

Standard Equipment: Some kind of knife

Start a Discussion Discussions about Jeff the Killer (ISOLATION)