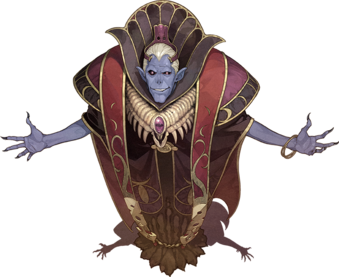 Jedah is a main antagonist in Fire Emblem Gaiden and it's remake, Fire Emblem Echoes: Shadows of Valentia. He serves as the High Priest of the Duma Faithful. His service to Duma went as far as offering up the souls of his daughters to him, turning them into Witches. During the story, he corners and tricks Celica into offering her own soul to Duma, saying it would free Mila and save Alm and Valentia. He is then defeated alongside Duma in the final battle.

Attack Potency: At least Town level (Superior to Berkut, and fought and proven to be a great challenge to Alm, Celica, and Zeke)

Durability: At least Town level (Can take multiple hits from Alm, Celica and the rest of the party), higher with the Dracoshield

Range: Tens of meters normally, copies the opponent's range with the Animus Rig.

Weaknesses: Duma's Gift is limited and cannot negate every 4th exchange of attacks.