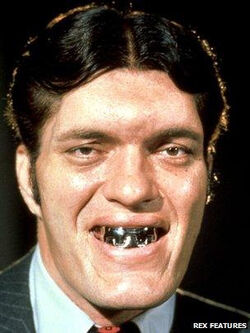 Jaws is a famous Bond villain from The Spy Who Loved Me and Moonraker 007 films. He is best known for his infamous metal teeth and extraordinary durability. He's also appears in the video game, Everything or Nothing as a supporting villain.

Powers and Abilities: Superhuman Physical Characteristics, Master Combatant, Stealth Mastery, Vehicular Mastery | All of the above plus, limited Fire Manipulation (Via the flamethrower), Weapon Mastery and limited Resistance to Electricity Manipulation (could take bolts of electricity and keep fighting, until he eventually took too much and was knocked unconscious)

Attack Potency: Wall level physically (Jaws killed a bull shark just by biting it, can bend metal and bit through metal cable) | Wall level (Could lift and destory metal electric canisters, rip them out of the train and throw them/destroy them easily. Superior to Bond physically)

Speed: Superhuman (Is comparable to Bond)

Lifting Strength: Class 1 (Scales to, and is vastly superior than, Bond. Overpowered a shark) to possibly Class 5 | Class 1 (Tore and lifted electric canisters out of the ground. Threw them at Bond with ease.

Durability: Wall level (Survived a drop which would of caused this much impact) | Wall level (Superior to Bond and while he was affected by his attacks, he wasn't taking damage.)

Range: Standard melee range, tens of metres with the flamethrower and fire arms

Intelligence: Average | Above Average (On occasion has shown to match Bond in strategic fighting)

Weaknesses: Can die by enough brute force, however it would take an immense amount of bullets and rockets to kill him. Is very direct and has limited range.