Born in 1946, in the small town of Crystal Lake to Elias and Pamela Voorhees, Jason Voorhees had severe facial deformities, Hydrocephalus, and mental disabilities at birth. Pamela raised him on her own and homeschooled him, isolating him from the rest of the community. When he was 11, incapable of getting him a babysitter, Pamela took him to Camp Crystal Lake, where she worked. Here, he was bullied and tormented by his fellow campers and seemingly drowned when they threw him into Crystal Lake. Mad with grief, Pamela killed the counselors who failed to protect her son and prevented any from returning. However, Jason had actually survived, and after the death of his mother, Jason created a shrine in her memory, avenged her death, and took her place in preventing any from returning to Crystal Lake.

Powers and Abilities: Superhuman Physical Characteristics, Stealth Mastery, Weapon Mastery | All previous abilities, Enhanced Senses, Self-Sustenance (Types 1, 2, and 3), Illusion Creation, Mind Manipulation (His heart hypnotizes others into eating it, transferring his soul into them once they do, those he possesses gain his strength, stamina, and durability and have type 2 Immortality and Pain inhibition), Teleportation, Possession (Can possess those who eat his heart and transfer his spirit into others in these hosts, and is implied to have possessed Roy Burns in the novelization of Part V. Once he leaves a host's body, it quickly rots to death), Immortality (Types 2, 3, 4, 6, and 7, can survive lethal injuries such as being set on fire, impaled, and shot all over his body, is capable of regeneration, is ultimately an undead being, can possess others, has come back from dying), Regeneration (Low-Mid; can regenerate from seemingly lethal wounds such as having his heart destroyed and from having most of his torso blown up by a grenade; however, he does not always regenerate and typically does not need to), Resurrection (Pulled himself out of Hell and restarted his heart in Freddy vs Jason), Resistance to extreme temperatures, Poison Manipulation, Soul Manipulation, and Pain (Does not react to being set on fire, impaled, having a shovel break over his head, or any other wounds) | All previous abilities, Regeneration (Mid; mashed his clone's brain into his own and regenerated both, and was reconstructed into this form after his head and limbs were blown off), Cyborgization

Attack Potency: Wall level (Casually shattered a wooden door, which would wield this much energy at the very minimum, and crushed a man's head in both hands, though it took some time) | Wall level (Can easily tear humans apart with his bare hands, decapitated three humans with a single swing, destroy cars, and once demolished a construction site, can casually punch off heads) | Wall level (Even stronger than before, easily decapitated Kay-Em, who had defeated his undead form, with a casual punch, ripped through a metal wall, easily took down blast doors Undead Jason could not damage and rammed his clone through a metal wall)

Speed: Athletic Human | Supersonic (Killed a small group of soldiers before they could react, outran bullets from a helicopter; an M230 chain gun, which is often present on attack helicopters, has a muzzle velocity of 805 m/s, moved around a room much faster than his victim, and killed a soldier before he could react; can keep up with Ash) | Supersonic (Fought against a clone of Undead Jason)

Lifting Strength: Superhuman (Can throw a dead body through wood) | Class 5 (Tossed a car and flipped a boiler that likely weighs this much) | At least Class 5 (Can uproot and throw trees, and he overpowered a clone of Undead Jason)

Durability: Wall level | Wall level (Withstood gunfire from a FBI task force, withstood a car explosion, and easily recovered from being smashed around at high speeds and having a boiler dropped on him) | Town level (Survived a robot's self-destruction and falling to Earth from outer space)

Stamina: Extremely high. Jason can survive and continue hunting and killing his prey even after taking injuries that would be lethal for others. Even as an ostensibly normal human, he was able to get up quickly after his collarbone was sliced through and recovered from having an axe blade slammed into his skull, going straight back to killing no worse for wear. In undeath, his stamina becomes even greater, allowing him to walk through worse injuries without issue. In Freddy vs Jason, he continued to fight after having three of his fingers sliced off, both of his eyes gouged out, and being impaled in numerous places and slashed multiple times, getting up to land a final attack on Freddy after having his own machete shoved deep into his body and being set on fire. As a cyborg, his stamina becomes higher still, possibly limitless due to being both mechanical and undead. While his stamina isn't as impressive in the reboot, he still proves capable of killing multiple people in succession in a short amount of time, and can still recover from injuries such as being stabbed with his own machete and having his head crushed in a meat grinder.

Range: Extended melee range, further with other weapons and by throwing his machete

Standard Equipment: Usually his signature machete, among any other number of weapons, such as axes, spears, pitchforks, and in the reboot, a bow.

Intelligence: Average. Jason is capable of effectively tracking and killing his victims, using any number of weapons and tools as deadly weapons, and setting up basic traps. His intelligence was further enhanced after he was empowered and resurrected by Freddy in Freddy vs. Jason vs. Ash. However, due to being legally mentally handicapped and never going to school, he highly lacks academic knowledge.

Weaknesses: Being reminded of his mother can stop Jason in his tracks, and he can also be incapacitated by trapping him in the waters of Crystal Lake. When possessing others, only those with Voorhees blood will last and allow him to return to his true form.

Note: This is a composite profile utilizing Jason's appearances in supplementary media such as comics and all his movie appearances.

One last scare... But was it real?
Add a photo to this gallery 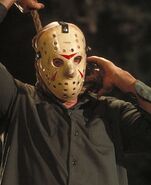 Armed with his iconic machete 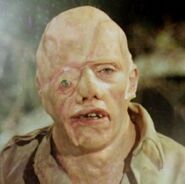 Another piece of make-up

Jason in the unused ending for Part III 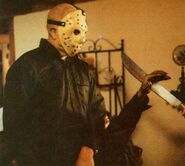 Seen from another angle 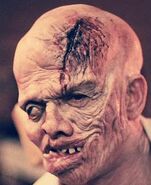 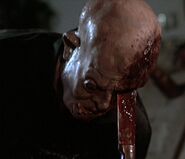 He's Back, the Man Behind the Mask

And He's Out of Control

No longer afraid of water 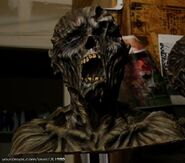 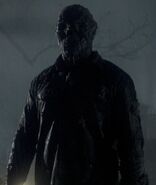 Replica of the original make-up

C. J. Graham in a convention alongside Tom McLoughlin, director of Jason Lives

Jason alongside Alice Cooper, creator of the movie's theme

Ditto, but in a less friendly situation

One of Jason's more unusual weapons, a circular tree-trimming saw

Jason is attacked by the military in Jason Goes to Hell

Jason is dragged into Hell

Jason's appearance in Freddy vs. Jason

Jason render for Freddy vs. Jason

Jason in the Dream World

Jason after his battle with Freddy 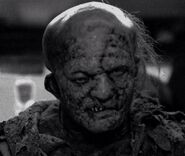 Jason's face in Freddy vs. Jason, as shown in a figure
Add a photo to this gallery 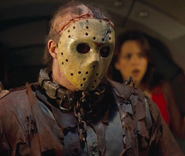 Having lost his old machete, Jason acquires a new one 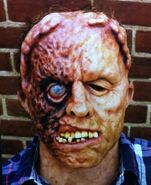 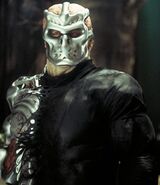 Callback to the sleeping bag kill 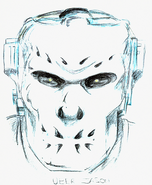 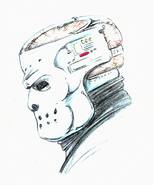 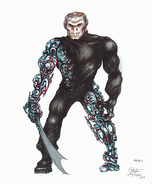 Cover for the tie-in comic

Lyle (Paradise Lost) Lyle's Profile (Note: Speed was equalized, Base Lyle and Über Jason were used, Lyle has 1 week of prep, Both were bloodlusted, and Range is 10 meter)