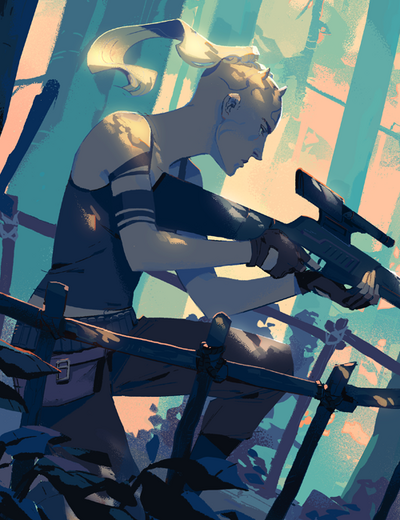 Although Jas respected and deeply loved her aunt, she did not adopt her code of honour. During the Galactic Civil War, she often accepted contracts from the empire to hunt down political dissidents and high profile Rebel Alliance members. She also had no desire whatsoever to help others. After the Battle of Endor she opportunistically shifted sides to the New Republic, helping to hunt down imperial war criminals with Norra Wexley’s team of New Republic special operatives. She eventually came to see her new teammates as genuine family, falling in love with Jom Barell and developing a deep friendship with Sinjir Rath Velus and her other comrades. During the Liberation of Kashyyyk and Battle of Jakku in 5 ABY, she began to develop a genuine sense of honour of her own, much like her aunt Sugi’s.

Tier: 9-B physically. 9-A with her slugthrower

Attack Potency: Wall level physically (Capable of holding her own against and also drawing blood from Mercurial Swift, who is capable of fighting evenly against and staying conscious after taking blows to the head from the likes of Dengar). Small Building level with her slugthrower (Capable of taking out BX-series droid commandos with a single shot and collapsing large stone pillars with a single shot on the highest power setting [said pillars being wide enough for an adult human to comfortably take cover behind]. Overall appears to be roughly as powerful as the DL-44 heavy blaster pistol, a weapon whose shots are capable of blasting apart large chunks of solid rock and collapsing a portion of a decently-sized cave)

Durability: Wall level (Should be no less durable than Mercurial Swift, from whom she can draw blood with a headbutt and who can stay conscious even after taking blows to the head from Dengar)

Stamina: At least Peak Human to Superhuman. As a physically fit full blood Zabrak, her endurance should be above that of any human. Zabraks have naturally greater stamina compared to humans due to their two hearts and much higher levels of pain tolerance (an adaptation which evolved due to the extremely harsh conditions of their homeworld).

Range: Melee range with horn daggers, at least several hundred metres to potentially a few kilometres with her slugthrower.

Intelligence: Fairly High. Jas is a highly skilled and dangerous combatant who should not be taken lightly. She is also extremely cunning and a capable planner. During the Rebellion on Akiva she proved herself to be a capable strategist and tactician and highly capable at improvising, creating a map and coming up with plans to capture high ranking imperial war criminals with nothing but household items and what little supplies she had on her person. During the Battle of Jakku she proved herself to be capable at escaping/evading capture and a skilled negotiator.

Retrieved from "https://vsbattles.fandom.com/wiki/Jas_Emari?oldid=4113664"
Community content is available under CC-BY-SA unless otherwise noted.