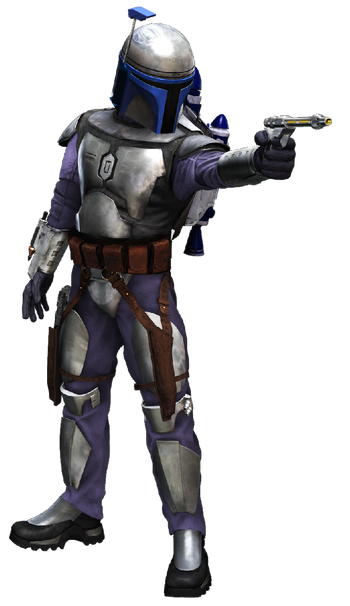 Jango Fett was a human male bounty hunter from Concord Dawn in the Mandalore sector. He was widely regarded to be the best in the galaxy during the last years of the Galactic Republic. He was selected by Darth Tyranus as the genetic template of the Clone Troopers for the Grand Army of the Republic. In addition to a handsome payment from Tyranus and Darth Sidious, Jango asked for an additional payment from the cloners of Kamino; he asked for a genetically unmodified and normally aging son to raise all on his own. He would name this child Boba Fett.

Tier: 9-B physically. 9-A with his blasters. High 8-C with heavy weapons and explosives | 8-A

Age: Around 44 years at the time of his death

Attack Potency: Wall level (Should be at least comparable to Boba and the likes of Dengar). Small Building level with his blasters (His WESTAR-34 pistols, being heavy blaster pistols, should be this powerful). Large Building level+ with heavy weapons and explosives (His arsenal likely includes Class-A Thermal Detonators and the rockets fired by his jetpack are even more powerful) | Multi-City Block level+ (Comparable to his son. Killed 7 Jedi Knights with his bare hands and could match holding-back Jedi Masters. Although there is no set amount of power nor durability for a being to be a Jedi, the most notable ones Jango fought far surpass him in those categories)

Striking Strength: Wall Class (Should be comparable to Boba in his prime and the likes of Dengar) | Multi-City Block Class+

Durability: Wall level himself, Large Building level+ with his armour (His armour is made of Durasteel, the same kind used in the armour of Darth Vader and on the AT-DP walker, although the durability of this metal depends on the thickness of the materials made from it. It should be no less durable than that of Dengar) | Multi-City Block level+

Standard Equipment: Fett wore a set of Mandalorian armor equipped with a jetpack, flamethrower and rope cord which is capable of holding Chewbacca via powerscaling from Boba and likely the same equipment such as a wrist laser, WESTAR-34 blaster pistols.

Intelligence: Very High. Jango was one of the most talented and dangerous warriors in the entire galaxy. He was amazingly skilled as a martial artist and with all sorts of weapons, was a highly cunning warrior and competent tactician, was also a masterful trainer as evident in his training of Boba Fett and framing of training regimes for elite Clone Troopers of the Grand Army of the Republic.

Finn (Star Wars) Finn's Profile (Finn was given all of his equipment including the Skywalker Lightsaber. Jango Fett's High 8-C weaponry was restricted)