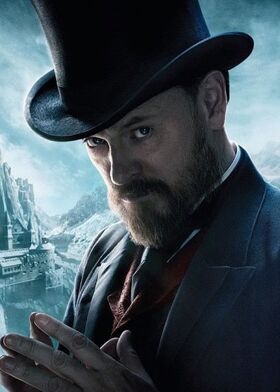 He is a genius math professor and celebrated author at Cambridge University. In secret, however, he is a terrorist and criminal mastermind looking to ignite a war between France and Germany that he can profit from. He is also Sherlock Holmes's archenemy.

He was portrayed by Jared Harris, who also played Mac McGrath in Mr. Deeds, and David Robert Jones in Fringe.

Name: James Moriarty, Professor Moriarty, Napoleon of Crime (by Holmes), The Professor, The Doctor, The Devil

Attack Potency: Athletic level (Is a highly adept combatant and earned the title of "Boxing Champion of Cambridge" as a young student. Is on par with Sherlock Holmes who predicted Moriarty would win should they engage in physical combat), Street level with his gun, higher with explosives

Intelligence: Genius. Moriarty is extremely intelligent, considered to be the equal of Sherlock Holmes, something that even Holmes himself admits to after examining his handwriting. He is easily capable of outsmarting even the strongest of opponents in a battle of wits. A deadly strategist and tactician, Moriarty was capable of easily deducing what a person is doing with a simple glance, is a confirmed polymath, is quite knowledgeable of many Opera songs due to his interest in the field and he displayed high levels of knowledge in piano music and an excellent master of financial and economic matters. He even managed to fool Holmes due to his great ruthlessness granting him an advantage over the world's smartest detective and came very close to outsmarting him and causing a World War. While Sherlock ultimately proved smarter when they engaged in intellectual matches by chess and later a violent altercation, Moriarty had came very close to winning in their chess contest.

Weaknesses: Is extremely overconfident in his intelligence and his abilities, normal human weaknesses otherwise none notable.

Retrieved from "https://vsbattles.fandom.com/wiki/James_Moriarty_(Movie)?oldid=6089659"
Community content is available under CC-BY-SA unless otherwise noted.