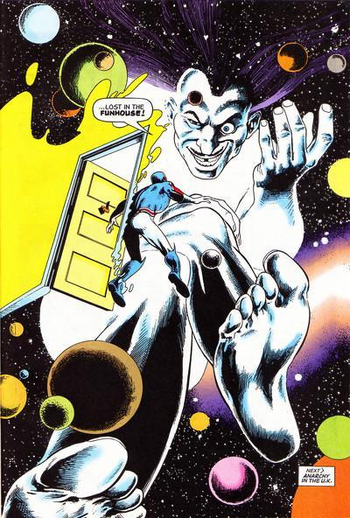 "Mad" Jim Jaspers is a powerful supervillain from Marvel Comics who first appeared in Marvel Super-Heroes (UK) Vol 1 377, an enemy of Captain Britain and Excalibur. Despite his obscurity among the Marvel Universe he is an incredibly dangerous being, whose powers caught the attention of the "Omniversal guardian" Roma.

There are two known Jaspers who are considered threats to reality itself, the first being a resident of Earth-238, who was killed in the destruction of his universe, and the second being the far more powerful version from Earth-616, whose fate is currently unknown after he fused with The Fury.

Attack Potency: Low Multiverse level (He was manipulating the Earth-238 universe in his own image, and casually breaking the laws of psychics as he did so. Easily capable of making tesseract spaces in 3 dimensional universes. His influence threatened to spill over to multiple universes.) | At least Low Multiverse level, possibly far higher (More powerful than the Earth-238 James Jaspers. He was claimed to be a potential threat to the "Omniverse" as his power continued to grow, but he was stopped before he reached his full potential.)

Durability: Unknown | Unknown (But he was temporarily killed by The Fury)

Intelligence: High (He is a well-established politician, and won in a landslide for his anti-superhero campaign. He was briefly the prime minister of Britain.)

Weaknesses: He is powerless in absence of reality to manipulate.

Note: Before modifying this page, please read the Power-scaling Rules for Marvel and DC Comics.

Jaspers' Earth-616 incarnation is rated as unknown due to the general unreliability of the term "Omniverse".