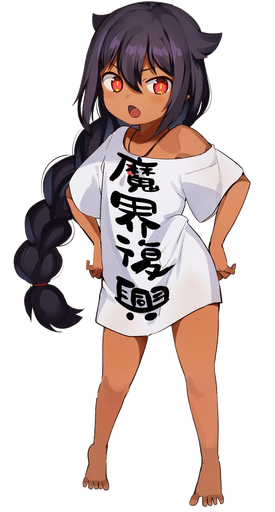 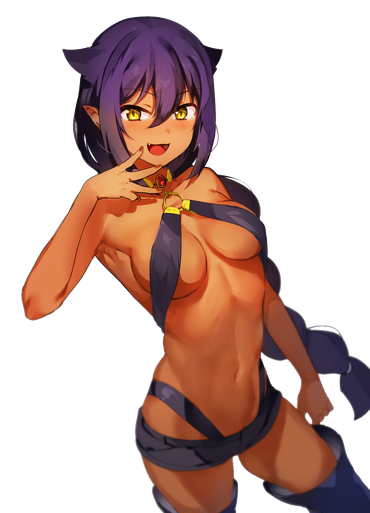 Jahy is the main character of the manga Jahy-sama Won't Be Discouraged! She is the second greatest Demon Lord of the Demon Realm and her existence is feared and respected throughout.

One day, a magical girl appeared in the realm seeking to destroy it. After discovering this, Jahy confronted the magical girl and ordered her to flee, however, the mysterious magical girl easily defeated Jahy and destroyed the Demon Realm. After being defeated by the magical girl, Jahy lost all of her mystic gems and powers.

She eventually woke up near a pond and realized that she had turned into a young girl in the human world. Because of this, she made it her quest to collect more mystic gems to return her powers and restore the Demon Realm.

Powers and Abilities: Superhuman Physical Characteristics, Martial Arts, Weapon Mastery (Has been shown to use weapons such as scythes among others), Magic, Immortality (Type 1), Multiple Personalities (In her part-time job, she feigned politeness in front of the costumers despite not being her true feelings), Social Influencing, Transformation (She can transform into her true form when she has a Mystic Gem, however, she has a limited amount of time before she turns into a child again), Minor Dark Energy (She can release a dark energy), Probability Manipulation (Mystic Gems can give bad luck to others if being touched by humans, Jahy stated that the entire world will be destroyed if someone get their hands on them), Resurrection (She stated that she could resurrect as the Demon Lord if she had more gems), Matter Manipulation (Her Mystic Gem is capable of cleaning the grime in the kitchen), Weather Manipulation (Her Mystic Gems can cause thunderstorms), Resistance to Magma Manipulation (She can take magma baths all day without showing any pain) | All previous abilities with Flight, Dark Energy, Fire Manipulation, Explosion Manipulation (Could make an explosion with a snap of her finger), Reality Warping, Possibly Summoning (Possibly summoned a bone-looking creature to defeat Salwa), Telekinesis, Homing Attack, Transmutation (Created a sharp-looking gem and used them to attack), Forcefield Creation (Her barrier activated automatically when Magical Girl tried to attack her), Pocket Reality Manipulation (She stated that she could restore the Demon Realm back if she had enough Mystic Gems)

Attack Potency: Human level physically (Kicked a person who tried to take away Kokoro from her), Unknown with Environmental Destruction (It's stated that once others have her Mystic Gems, they can cause disasters to themselves and the human world) | Unknown (Could go toe-to-toe with Magical Girl who destroyed her demon realm with a projection of a giant gem)

Speed: Normal Human (Could outrun the Landlady in her child form) | Unknown (Could keep up with Magical Girl who could fly ahead of Jahy and Druj)

Lifting Strength: Above Average Human (Lifted a big rock in her true form even though she was still weakened) | Unknown

Durability: Human level (She was able to survive walls and ceilings collapsing on her head) | Unknown (Blocked Magical Girl's wand with her wrist)

Stamina: High (Has trained and exercised with Clerk), Limitless with Mystic Gems (Mystic Gems have mysterious energy that give her near inexhaustible stamina)

Intelligence: Gifted (She is known to be the second greatest Demon Lord in the Demon Realm. She is capable of making strategies to overcome difficulties such as making traps in her house in the human world to trick Magical Girl. She also prepared some tactics to fight against Magical Girl on their rematch)

Weaknesses: Cocky and prideful, can get tricked easily and will not take anything seriously if she thinks her opponent is weaker than her | Even more overweening since she was in the demon realm.