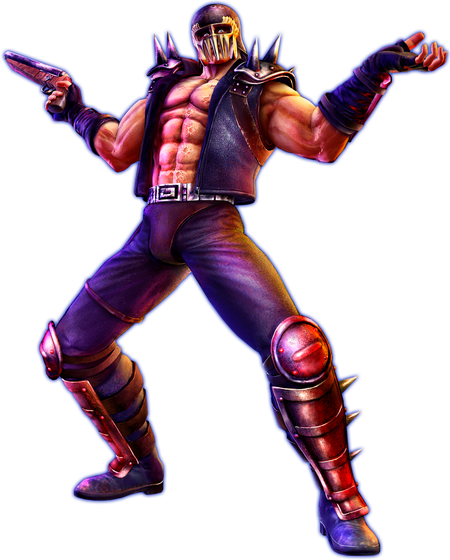 Jagi is the first son of Ryuken, and the third eldest of the four Hokuto siblings. Initially barred from training with his brothers to become the successor to Hokuto Shinken, Jagi managed to eventually convince his father to teach him. However, he struggled with the training and grew increasingly jealous of his siblings, particularly Kenshiro. Eventually, when Kenshiro was named the successor to Hokuto Shinken, an enraged Jagi attacked him, and was soundly defeated, but spared, left with horrific scarring that had to be covered with a mask. As vengeance, Jagi convinced Shin to attack Kenshiro, and later, gave himself Kenshiro's scars and committed atrocities in his name.

Powers and Abilities: Superhuman Physical Characteristics, Practitioner of Hokuto Shinken, which allows him to target and hit someone's pressure points for various purposes (Ranging from causing them to explode to manipulating their movements to healing them) and Nanto Seiken, which allows him to slash and stab at his opponents, slicing them apart with air pressure, Can use weapons like shotguns, bazookas, and needles effectively, Aura, Chi Manipulation (Can use his toki offensively by infusing his bullets with it), Regeneration (Low-Mid), Power Nullification (Can negate the effects of pressure points), Instinctive Reaction (Hokuto Shinken possesses a technique that counters a technique that focuses on dodging attacks via subconscious reflexes), Sleep Manipulation (Can put people to sleep with by pressing their pressure points), Death Manipulation (Can bring about death by pressing a persons pressure points), Memory Manipulation (Some of his techniques allow him to change or erase the memories of victims), Resistance to Clairvoyance (Users of the Hokuto arts can bend their fates how they choose, making it difficult to read their destinies)

Attack Potency: Small Country level (Can injure and scar his own body. Engraved the 7 stars of Hokuto into his chest)

Striking Strength: Small Country Class (Could injure his own body)

Durability: Small Country level (Survived a massive nuclear explosion that could be seen from space)

Stamina: High (Trained under the art of Hokuto, making him far above any normal human)

Standard Equipment: Shotguns (Can infuse the bullets with toki), needles, and a bazooka (only shown to have this in the Hokuto games)

Weaknesses: Jagi is overconfident, and his Hokuto Shinken and Nanto Seiken are sloppy.

While trained in the art of Hokuto Shinken, Jagi's use of it is very sloppy in comparison to his brothers, often missing the pressure points he is targeting.

Jagi in Fist of the North Star: Ken's Rage 2

Jagi in the TV series.

Jagi in Legends ReVIVE
Add a photo to this gallery