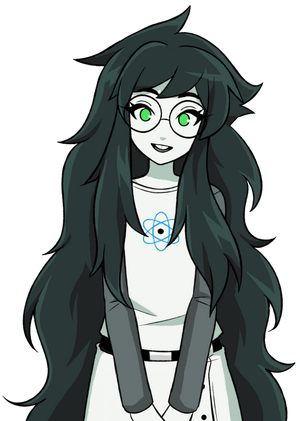 Jade Harley is one of the main characters in Homestuck. She is the fourth kid to be introduced. She has long black hair, round glasses, and a bucktoothed grin. She wears a shirt with a constantly changing blue picture on it, a belt, and a button-up long skirt. She was named "Farmstink Buttlass" while she was sleeping and thus she couldn't object to the name like the three other kids did -- however, she wrote a note in advance about it.

Jade goes by the chumhandle gardenGnostic when chatting on Pesterchum and her web browser of choice is Echidna.

Age: 13 at the beginning of the story, 16 currently

Attack Potency: At least Small Building level (Comparable to the other Beta Kids) | Multiverse level+ (Inheriting Bec's First Guardian powers on top of gaining her space attribute grants her almost complete control over matter and space, shrunk an entire universe down to a size comparable to that of a medium-sized ball, considered to be on par with Bec Noir. Can channel the full energy of the Green Sun)

Durability: At least Small Building level (Fell from hundreds of stories and landed on Bec unharmed) | Multiverse level+ (Broke through the Fourth Wall and crossed the Yellow Yard into another universe. Implied to be capable of fighting with Bec Noir), God-Tier immortality makes her difficult to kill

Jade early on in the story.

Jade as the Witch of Space.

"Grimbark" Jade under control of The Condesce.
Add a photo to this gallery