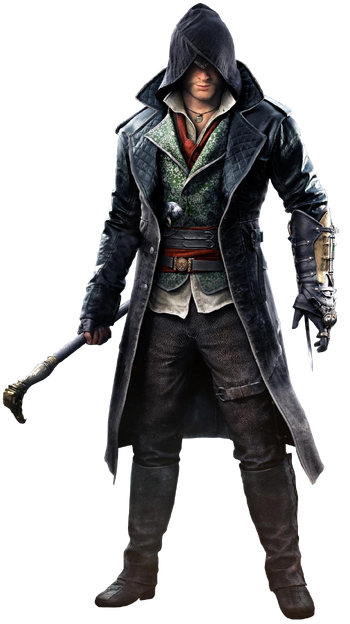 Sir Jacob Frye (1847 – unknown) was a Master Assassin of the British Brotherhood of Assassins, active in London during the Victorian era, and the younger twin brother of Dame Evie Frye. He later became a member of Queen Victoria's Order of the Sacred Garter, the brother-in-law of Jayadeep Mir, and the grandfather of Lydia Frye.

Born in Crawley, where they were raised as Assassins from birth, Jacob and his sister traveled to London to take the city back from the Templars after their father died of natural causes.

Alongside Evie, Jacob led the Rooks, a criminal syndicate opposing the Templar-backed Blighters. While his sister would primarily pursue the Shroud of Eden, Jacob assassinated various prominent Templars to destroy Grand Master Crawford Starrick's influence within the city.

Sometime after returning to London, Jacob came to blows with his apprentice Jack, who had developed an extremist view of the Assassins' mission and his own warped variant of the Creed. He eventually lost control of the Rooks to Jack, who intended to use the gang to further his goals. In retaliation, Jacob sent a few of his female initiates after Jack, disguised as prostitutes. His efforts proved to be in vain, however, with Jack brutally eliminating all opposition sent his way. This marked the beginning of the Whitechapel murders, otherwise known as the Autumn of Terror. Jacob later confronted Jack, but was defeated, kidnapped and locked in the cells beneath Lambeth Asylum until Evie came to his rescue and killed Jack, reuniting the twins once more.

In 1893, Jacob's granddaughter, Lydia Frye, was born. With Lydia's parents often away on the continent performing missions for the Brotherhood, responsibility for Lydia’s training fell to Jacob and Evie.

At the outbreak of World War I in 1914, Jacob and Evie were removed to the safety of the countryside, while Lydia remained in London to protect the city from German spies and Templar agents.

Age: 21-22 during the main events of the game, 41 during the events of Jack The Ripper DLC, 71 by the time of World War I (Was alive alongside his sister and trained his granddaughter Lydia)

Classification: Human-Isu Hybrid, Master Assassin, Leader of the Rooks, Member of the Order of the Sacred Garter

Superhuman Physical Characteristics, Enhanced Senses, Extreme Pain Tolerance, Indomitable Will, Weapon Mastery, Stealth Mastery, Expert Acrobat, Expert Parkourer, Master Fighter, Extrasensory Perception, Clairvoyance, Information Analysis, Retrocognition and Analytical Prediction (Eagle Vision works as a "sixth sense", which allows its users to perfectly recreate and revisit past events that had already happened, could look for objects of interest, differentiate between friend-to-foe, see a person's true intentions and revisit their memories, figure out weak spots, analyze extremely dangerous areas to better understand them, land even allow them to fight against other characters with precognitive powers, like in the case when one makes use of the Apple's precognitive powers in battle or when the Isu fight against hybrids, and can make accurate predictions of their own in the midst of combat or during investigations with proper concentration), Regeneration (Mid-Low, can heal from vicious stab wounds without medical aid), Pressure Point Strikes and Pain Manipulation (Capable of inducing great pain via various pressure points), Stealth Mastery, Statistics Amplification (Via several of his suits), Weapon Mastery (Hidden blades, throwing daggers, cane-swords, revolvers, kukris, brass knuckles, gatling guns, etcetera), Highly skilled acrobat, Well versed in the deadly arts of killing, Highly skilled in stealth assassination techniques, Expert in parkour, eavesdropping, interrogation, and pickpocketing, Can create illusions and bend minds to the user's will (via Pieces of Eden), Technology Manipulation (As an Isu-Hybrid, Jacob is capable of interacting with and using First Civilization technology without suffering from any detrimental effects), Electricity Manipulation (via Voltaic Bombs), Status Effect Inducement (Via various combat maneuvers and other weapons), Sleep Manipulation, Madness Manipulation, Fear Manipulation and Poison Manipulation (Via beserk darts that could also kill, via Fear Bombs and tactics, and via sleep darts), Smoke Manipulation (via Smoke Bombs)

Attack Potency: At least Small Building level+ (As a fully-fledged Isu-Hybrid and Master Assassin, he should at the very least be on par with Altaïr Ibn-La'Ahad and Ezio Auditore da Firenze. Can trade blows with those who can harm him and are of comparable durability. Traded blows with and could draw blood from a Shroud of Eden-amped Crawford Starrick, who should be comparable to most Isu with the enhancement, without any difficulty whatsoever, and was only ever overpowered when he went in to wrestle with the Templar. Comparable to his twin sister Evie), higher with certain suits Hidden Blades, brass knuckles, kukris, Cane-Swords, revolvers (Many of his weapons and revolvers can casually and brutally gore enemies or even send them flying in a single shot. His Hidden Blades are capable of effortlessly one-shotting enemies of comparable durability. Some of his suits can permanently amplify his physical strength) and prototype Gatling Gun (Left an entire train carriage in ruins)

Speed: At least Supersonic+ (Can easily dodge multiple shots from Colt Walker revolvers and rounds from the Snider-Enfield Rifle at point-blank range and fire back multiple times at enemies simultaneously. Should be on par with most of the other Assassins in the series. Fought on par with Jack for an extended period of time, but was ultimately defeated.. Almost overwhelmed a Shroud-amped Starrick, who was now at the very least on par with the Isu in terms of speed. Vastly superior to his colleague and brother-in-law Jayadeep Mir, who was somewhat on par with his father Arbaaz Mir, who could easily outpace mortar-fire and dodge musket-shots at point-blank range himself. On par with his granddaughter Lydia)

Lifting Strength: At least Class 5 (Can effortlessly lift, flip, slam and toss heavyset fighters and effortlessly crush spines with only one arm. Can effortlessly break bones by simply bending them. Can effortlessly swing around the 9-kilo Wallop Enhancer with one hand at top speed. Crawford Starrick's only advantage over him, even with the Shroud equipped, was his lifting strength, and Jacob still managed to somewhat wrestle with him, and was even able to briefly pin him down)

Striking Strength: At least Small Building Class+ (Easily capable of twisting and snapping bones like they were toothpicks at severe angles. Can easily crush the spines of grown men with only one arm and send two people flying several meters with a single kick. Can easily detach train carriages by simply punching at their linkages. Damaged a Shroud-equipped Starrick with his strikes), higher with melee weapons and certain suits

Durability: At least Small Building level+ (Took hits from a Shroud-amped Crawford Starrick, who was now on par with the Isu. Was violently knocked back by the energy beams of the Isu temple beneath Buckingham Palace and was only temporarily knocked out, with said energy beams being powerful enough to vaporize three human beings at once and reduce them to a bloody mist at the slightest touch, as seen in the Observatory and Seismic Temples. Can easily tank massive explosions that usually involve multiple dynamite and nitroglycerin crates exploding at point-blank range that can send him flying several meters into the air, with each crate containing 5 dynamite sticks and a single dynamite stick generating about 1 megajoule. Also capable of no-selling explosions involving carriages filled with multiple barrels full of dynamite and nitroglycerin), higher with suits

Stamina: Very High (Can keep on fighting for more than 10 rounds even when heavily injured and still come out on top with virtually no exhaustion at all)

Intelligence: Gifted. Rather booksmart, unlike what most people would assume him to be. A very proficient brawler

Weaknesses: Standard human weaknesses, but has survived situations which would kill an average human. Often acts headstrong and reckless. Can't use Eagle Vision while running around.

Having been trained by the Brotherhood from birth by his father Ethan Frye, Jacob was a Master Assassin adept at both stealth and combat, despite his preference for the latter, he proved efficient in the use of the Hidden Blade as he could eliminate his targets with great skill. He also proved capable in eavesdropping, pickpocketing and lockpicking.

An experienced brawler, Jacob was proficient in hand-to-hand combat, able to engage multiple opponents simultaneously with minimal effort, where he could utilize his brass knuckles to employ more brutal take-downs. Due to the era's restriction on open weaponry, Jacob utilized an arsenal of hidden tools including his dual Hidden Blades, one of which was equipped with a rope launcher – a versatile tool that he could utilize to access and scale areas quickly, as well as create ziplines.

Accompanying this, the Hidden Blade was equipped with a mechanism that fired hallucinogenic darts; firing a dart into an open flame would result in a poisonous gas cloud, allowing Jacob to eliminate multiple enemies from a distance. Other weapons in his possession included a kukri blade, a cane-sword, a six-shot revolver and throwing knives.

Retrieved from "https://vsbattles.fandom.com/wiki/Jacob_Frye?oldid=6616344"
Community content is available under CC-BY-SA unless otherwise noted.