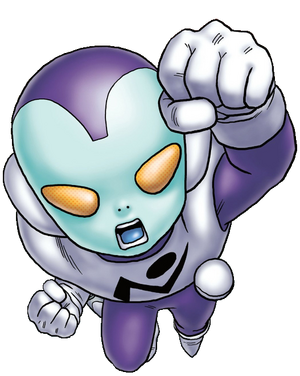 Jaco Teirimentenpibosshi (ジャコ・ティリメンテンピボッシ, Jako Tirimentenpibosshi) is a klutzy expendable member of the Galactic Patrol who is a super elite. To the public on Earth, Jaco is known as Mask Man.

Tier: 5-B, higher with his spaceship

Speed: Relativistic (Faster than Frieza's Soldiers, who should be comparable to Raditz). Massively FTL+ travel speed with his spaceship

Stamina: Extremely High (Only needs 30 minutes of sleep in order to function at his best)

Intelligence: High; has had all the languages of the galaxy uploaded into his brain. Calculated the distance between him and Burpman, determining he would be able to move faster than Burpman could fire