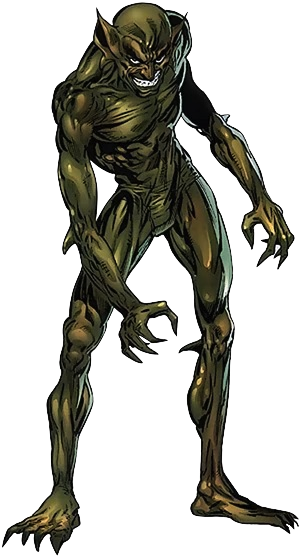 Professor Miles Warren was once a professor of biochemistry at Empire State University. He had studied genetics under the tutelage of the High Evolutionary, but was expelled from the Evolutionary's headquarters when he proved to be unstable. He received further training and equipment from Maelstrom. Warren fell in love with one of his students, Gwen Stacy, who was the girlfriend of Peter Parker. After Gwen was killed by the original Green Goblin, Warren turned his attention towards methods of cloning, inspired by the creation of a full-grown frog to attempt to clone humans. When he killed his lab partner Anthony Serba, who had discovered that Warren became completely insane, he developed the personality of the Jackal as he tried to convince himself that someone else had killed his assistant, rather than he.

Speed: Massively Hypersonic+ (Could keep up with Spider-Man and Scarlet Spider)

Stamina: High (Can stay in combat for several hours without signs of fatigue)

Intelligence: Extraordinary Genius. Studied under the tutelage of the High Evolutionary, and is a master in the fields of biochemistry, genetics and cloning.

Weaknesses: Is mentally unstable and sadistic in nature.