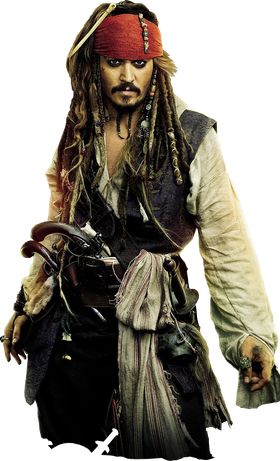 Captain Jack Sparrow is a legendary pirate and the protagonist of Disney's Pirates of the Caribbean film series. Portrayed by Johnny Depp, he is first introduced in the film Pirates of the Caribbean: The Curse of the Black Pearl and has appeared in the sequels Dead Man's Chest, At World's End, and On Stranger Tides. When the original Disneyland attraction was revamped in 2006, Jack Sparrow was added to the ride. Among other appearances, the character headlines The Legend of Captain Jack Sparrow attraction at Disney's Hollywood Studios, as well as several books and video games.

A legendary pirate of the Seven Seas, Captain Jack Sparrow is the irreverent trickster of the Caribbean. A captain of equally dubious morality and sobriety, a master of self-promotion and self-interest, he fights a constant and losing battle with his own best tendencies. Jack Sparrow's first love is the sea; his second is his beloved ship the Black Pearl (whether it be lost, found or lost again).

Despite his dishonesty and many deceptions, Jack Sparrow embarks on a number of grand and thrilling adventures with friends, some involving the supernatural. In his adventures, he battles the cursed Captain Hector Barbossa, the fearsome Davy Jones, and the evil Lord Cutler Beckett. In his search for the Fountain of Youth, he has to contend with the notorious Captain Blackbeard and the beautiful Angelica.

Attack Potency: Wall level (Has fought with those who can harm him such as Hector Barbossa, Davy Jones and Salazar)

Speed: Athletic Human with Peak Human combat speed and reactions (Held his own against Davy Jones)

Durability: Wall level (Took a great fall and smashed through several wooden bridges with no injuries, recovered from being thrown by Davy Jones)

Stamina: Fairly high (Took a great fall and smashed through several wooden bridges and got up and started running right after like nothing happened, can endure prolonged sword fights without fatigue)

Intelligence: Above Average, he can easily improvise strategies while fighting. He is also multilingual and can be somewhat manipulative. However, he often acts like an idiot, especially when drunk.

Optional Equipment: The Sword of Cortez

Weaknesses: He can sometimes be clumsy and kind of a moron.