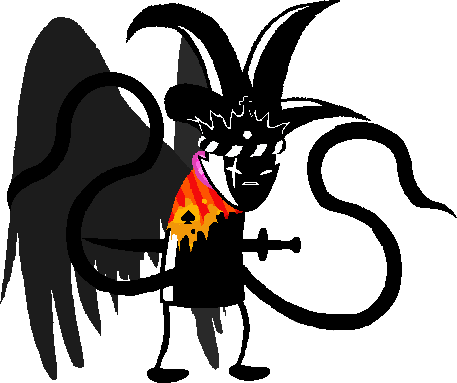 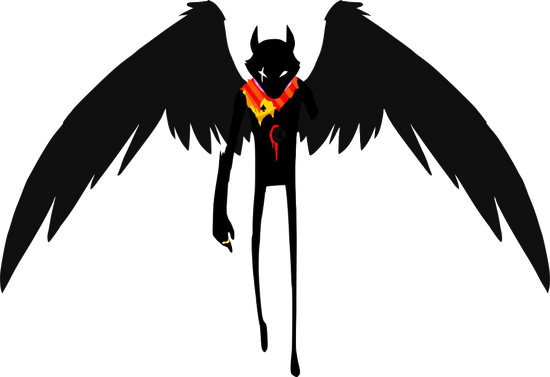 Jack Noir is an Agent of Derse who appears in every session of Sburb. He oversees various affairs of the kingdom and does all of the most important and most tedious paperwork, and is the direct subordinate of the King and Queen. In the kids' session, he slew the Queen, and soon after, the King, declaring himself as the Sovereign Slayer and wreaking havoc on the Medium.

Attack Potency: At least Small Building level, likely higher (An alternate version of himself was capable of easily slaughtering hordes of large monsters, and this version should have the same strength) | At least Mountain level, likely higher (Should be somewhat comparable to the Black King, who fought the trolls. Matched Bro in swordfight. Casually severed the chain that connected Prospit and its moon. Single-handedly slaughtered the Prospit,an and Dersite armies within seconds.) | Multiverse level+ (Inherited all of Bec's First Guardian powers, including matter and energy manipulation. Completely destroyed the Trolls' session. Doc Scratch stated that Jack was much more powerful than himself. Should be at the very least equal to God Tier Jade, who can channel the energy of the Green Sun, which is made out of two Bilious Slicks. Easily destroyed Bilious Slick, who contained infinite parallel versions of a universe)

Stamina: Limitless (Was able to fly through the Furthest Ring for three years straight while engaging in combat with the Peregrine Mendicant. His endurance comes from the Green Sun, which possesses the combined energy of two Bilious Slicks)

Intelligence: Above Average. Though Jack lacks impulse control and often loses his cool.

Weaknesses: Jack is quick to anger, he is unable to harm Jade Harley due to being prototyped with Bec, and is rather uncreative with his powers, as well as no longer being entirely sane. He also loses his powers should he lose the ring.

You begrudgingly don the comical hat.

You proceed to flip the hell out.