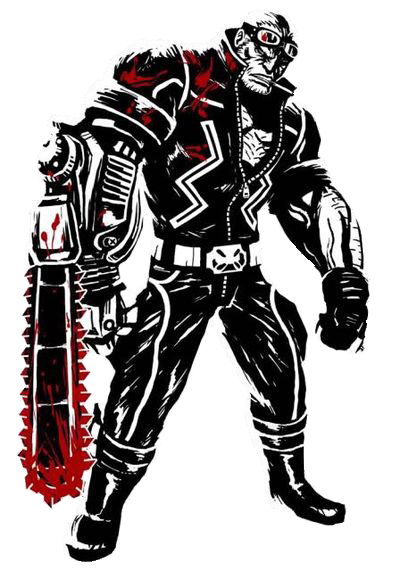 Jack Cayman is the protagonist of the Notorious Wii game "Mad World". A mechanic and former Marine, Jack enters Varrigan City to fight in the DeathWatch, a game where everyone kills each other for money. His motives for joining are revealed in due time... if you can live to hear it. however, he has only one known ambition: To Kill. And with a retractable chainsaw in his arm, a cigar, and plenty of swagger; there's nothing stopping him in paving the streets with blood.

Attack Potency: At least Wall level (Can slice a metal platform, chops down trees and whack enemies with them, and has cut two containers in half at once)

Speed: Supersonic (Outran a rocket propelled missile, and can slice bullets and giant vehicles that fly towards him in half)

Lifting Strength: Superhuman (Lifted a giant mace as big as himself and pummeled a giant with ease, threw a zombie threw a gate)

Striking Strength: At least Wall Class (Can send people bigger than himself flying through the air; knocked the Black Baron across a stadium, after which he blew into a giant splatter of blood)

Durability: At least Wall level (Can fall from great heights with no noticeable injury, tanked the explosion of a truck)

Stamina: High (can fight for extended periods of time)

Range: Standard melee range to extended melee range with Chainsaw and other melee weapons. Several meters if using a gun or just throwing someone.

Standard Equipment: Retractable Chainsaw arm, cigarettes, motorcycle. Can use anything he can finds as a weapon

Intelligence: Above Average. Jack Cayman possesses much combat experience, and won 3 other Deathwatch games before the events of the game happened. He also defeated some of the greatest warriors his world as ever known. He also took apart the giant robot known as M.A.R.T.I.N. single handedly.

Weaknesses: Chainsaw can overheat and can become unusable for a period of time