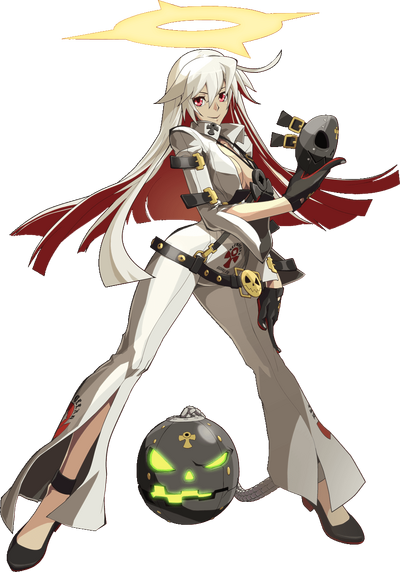 Jack-O' Valentine (or just Jack-O' for short), is a character in the Guilty Gear series. She's one of the three Servants of That Man alongside Raven and I-No.

Because her awakening remains incomplete, she can't function without her mask and toffee. Her past is shrouded in mystery, and her own memories are vague. Because she's in an unstable state, the tone of her voice changes rapidly.

Age: Unknown, but very young as she was only recently created by That Man

Classification: Half salvaged soul of Justice

Powers and Abilities: Superhuman Physical Characteristics, Forcefield Creation (Can create forcefield that blocks any projectile), Energy Projection, Flight (Can fly to outer space), Can summon various minions, Some of them can fly and they all have monstrous strength and speed, Able to make the minions to self-destruct, Able to change the shape and size of her pumpkin ball, Fusionism (Can fuse with Justice), Self-Sustenance (Type 1), Telepathy (Showed I-No her true self within her mind), Magic as Information Manipulation, Can trap a target inside her pumpkin ball and chain, Power Nullification (Normal magic is nullified in front of her), Dimensional Teleportation (Can teleport to Heaven's Edge), Regeneration (Low-Mid), Immortality (Type 1 and 3; Jack-O argued that Adam and Eve are immortals), Extrasensory Perception (Can sense Gears and secondary cosmic rays), Absorption (Absorbed Saint Orotario during Revelator), Limited Physics Manipulation (Can nullify friction of her attacks), Reality Warping, Biological Manipulation, Spatial Manipulation, Matter Manipulation and Disease Manipulation (Can create information flares due to being Scale of Juno which floods an area with information, breaks through space, destroy matter, warp reality, create diseases and mutations and rewrite information of other people), Soul Manipulation, Mind Manipulation, Death Manipulation, Existence Erasure and Deconstruction (As Scale of Juno, she can induce Absolute World, which kills all lifeforms in the universe instantly, erases everything within the universe, deconstruct matter at sub-atomic to macro quantum scale, and merge Backyard and reality, an universe that assaults one's body, mind and soul), Accelerated Development (Capable of quickly absorbing information), Formerly Non-Corporeal (Was nothing more than an information), Resistance to Extreme Cold, Cosmic Radiations, Power Nullification (Resists getting nullified by normal magic), Diseases (Gear cells are able to cure diseases), Information Manipulation and Transmutation (Resists getting her information rewritten), Material, Mental and Spiritual attacks (Actively resides in the Backyard which assaults body, mind and soul), Sleep Manipulation (Wasn't put into coma during Justice's inactivity), Empathic Manipulation (Can create emotions from scratch), Reality Warping, Existence Erasure, Death Manipulation, Deconstruction snd Spatial Manipulation (Can take Absolute World due to being a Scale of Juno) and Time Manipulation (Was able to move within Axl's frozen time)

Attack Potency: Universe level, possibly Universe level+ (Is considered to be the Scale of Juno which should make her comparable to Flame of Corruption. Fought against Sin and Bedman). Able to ignore conventional durability in some ways.

Speed: At least Massively FTL+, possibly Immeasurable (Around 32 trillion times the speed of light. Also kept up with Sol and Sin)

Intelligence: Unknown (Her intelligence shifts from that of a playful and immature child to a mature and very intelligent woman)

Weaknesses: She can't fight properly without her mask and toffee, due to being in an unstable state.