VS Battles Wiki
Register
Don't have an account?
Sign In
Advertisement
in: Characters, Five Nights At Freddy's, Female Characters,
and 22 more 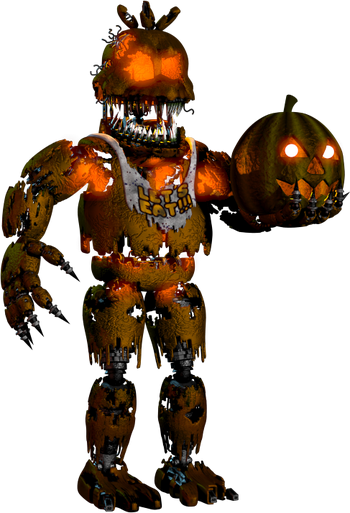 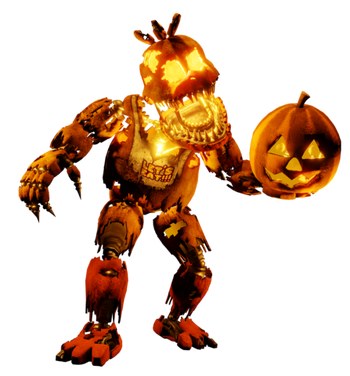 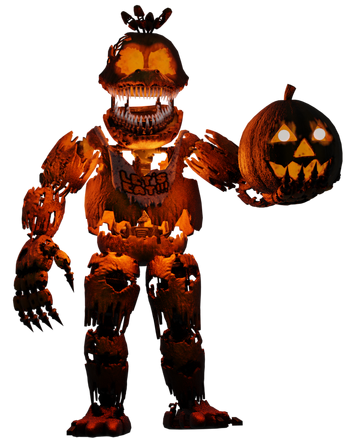 Jacko-O-Chica is a non-canon variant of Nightmare Chica, first appearing in Five Nights at Freddy´s 4.

Gender: Genderless, referred to as female

Stealth Mastery, minor Light Projection, possibly Resistance to Fire (Is on fire and isn´t affected by it), Self-Sustenance (Types 1, 2, and 3), Inorganic Physiology (Type 2), Natural Weaponry (via claws and teeth) | All previous abilities, Superhuman Physical Characteristics, Immortality (Type 2), Duplication and Intangibility when around enough heat (Will appear in two separate places at once when a location is overheated. If a location of over 100 degrees, Chica can move through doors, unhindered by them being closed), possibly Teleportation (Appears in overheated areas out of nowhere) and Enhanced Senses (Could be comparable to the other animatronics who can smell and hear the protagonist from a distance)

Superhuman Physical Characteristics, Inorganic Physiology (Type 2), Stealth Mastery, Likely Enhanced Senses (Claims to be capable of hearing the player's heart beating), Invisibility (via Cloaking), Illusion Creation or Teleportation via Fake-outs (If the animatronics do not decloak during charges, only their eyes appear and they vanish after reaching the player), Technology Manipulation (The player's phone produces static when hovering over the animatronic's location, Can cause the phone to glitch out temporarily (Interference), Haywires), Smoke Manipulation, Can be upgraded by feeding them Remnant, Resistance to Heat Manipulation and possibly Electricity Manipulation (Via returning despite being shocked)

Attack Potency: Street level (Not only they can utilize their hard claws and teeth, their body's size is bigger than that of a human) | Wall level (Can casually kill the player. Comparable to other animatronics, like Rockstar Freddy, Rockstar Foxy, and Mr. Hippo who can pull themselves apart, tear apart and slice/cut apart humans. Can damage the human skull which is this level) | Wall level (Threatens to carve up the player and turn them into a Jack-o-lantern, Compares to Springtrap)

Speed: Unknown, at least Average Human | Superhuman (Blitz the player, comparable to the other animatronics) | Superhuman (Can race around the player in an instant while keeping a distance), Higher with Servo Boosters MOD

Weaknesses: Can be stunned by light | Only appears when a location is overheated | None Notable

Note: The FNAF 4 key is going by how powerful the character is in the child´s dream, due to UCN confirming that the characters in that game were illusions.