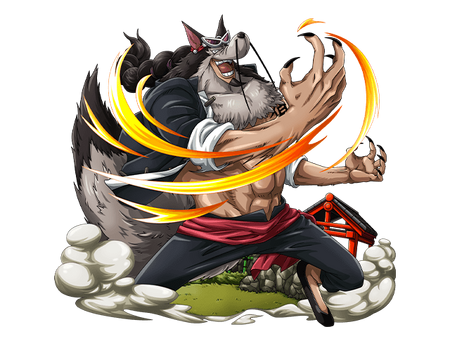 Jabra is one of the assassins of CP9. He is the last to be revealed, and is the 3rd strongest behind Kaku and Rob Lucci. He is a compulsive liar and tends to be very arrogant. He verbally assaults Lucci and Kaku upon learning that they both have superior physical strength to him. He is a Wolf Zoan Devil Fruit eater.

Jabra was involved with the fight against the Strawhat pirates during the events of Enies Lobby Arc. He engaged both Usopp and Zoro, disengaging from the latter, and critically injuring the former. Before Jabra could kill Usopp, Sanji stepped in and narrowly defeated him.

He escaped from Enies Lobby with the rest of CP9, but his current whereabouts are unknown.

Attack Potency: Town level+, higher with Tekkai Kenpo (Stronger than Usopp and sent him flying with a punch. Has a 2180 Doriki, putting him just below Kaku and far higher than Blueno in physical power) | At least Town level+, higher with Tekkai Kenpo (Far stronger than in base. Superior to Sanji before he utilized Diable Jambe. Should be comparable to Kaku in his Zoan form and Base Rob Lucci)

Speed: Massively Hypersonic+ (Faster than Kalifa, who reacted to lighting from a few meters away), higher with Soru

Striking Strength: Town Class+ | At least Town+ Class (Sent Sanji flying with his attacks, and over-powered him in the majority of their clashes)

Stamina: Very High (Is a trained assassin from childhood, and can fight for a long time and take lots of damage without becoming exhausted. Even just before being defeated by Sanji, Jabra showed no signs of exhaustion and very quickly shrugged off severe burns to his torso.)

Intelligence: Average. Jabra is a highly skilled and experienced assassin. He is a compulsive liar and tends to have his enemies drop their guard by making up stories, or trying to sympathize with them.

Weaknesses: Standard Devil Fruit User Weaknesses. He is very hot-headed and tends to charge straight into his opponent without thinking if they mock him.